According to the Centers for Disease Control and Prevention guidelines, “large in-person gatherings where it is difficult for individuals to remain spaced at least 6 feet apart and attendees travel from outside the local area” pose the highest COVID-19 risk to attendees and staff. And with Louisville maintaining a red alert status for COVID-19, the traditional gathering in downtown Louisville is not appropriate, city leaders said. 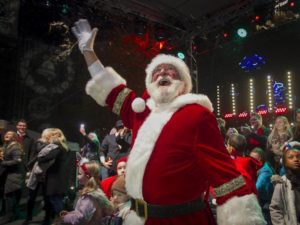 “In a normal year, bringing thousands of people to celebrate this annual kickoff of the holiday season is a wonderful thing,” said Mayor Greg Fischer. “But this is not a normal year, and at a time when we see the number of COVID-19 cases and deaths rising steadily, our usual celebration is simply not safe. I am pleased, though, to announce alternative plans that spread the festivities around our community.”

Here are the details of Light Up Louisville 2020, which will again be powered by longtime sponsor LG&E, along with 106.9 Play, AT&T and other sponsors:

Fischer urged people to share their photos from this alternative Light Up Louisville on social media using the hashtag #AroundLou. For more information, go to: www.lightuplouisville.org.

In addition, the mayor is reminding residents of these other holiday traditions in the city:

Noting that the holidays are a perfect time for our compassionate city to spread even more compassion, Fischer is asking residents to get involved in this year’s community-wide Toys for Tots drive.

Since 1947, Marines have collected toys for families in need – and they aren’t letting the pandemic stop them this year. Residents are asked to purchase toys for children ages 10-13 and 14-17 because the Marines have a surplus of toys for younger children.

From 6:30 a.m. to 6:30 p.m. Friday, Dec. 4, there will be a special drive-thru lane in front of Metro Hall for an easy drop-off. Marines and staff will be masked and wearing gloves to help facilitate the drop off. Other drop-off points include Paristown Point, Mission BBQ and the PRP Fire Department stations.

From the producers of the popular Jack O’Lantern Spectacular, Winter Woods Spectacular will debut in Iroquois Park from Nov. 27 through Jan. 2. Winter Woods is a half mile drive of lighting and artistry that will explore and celebrate the holiday season. Proceeds will benefit the Louisville Parks Foundation. Visit https://www.winterwoodsspectacular.org/ for more information.

Each year, the Louisville Mega Cavern is transformed into an underground holiday light spectacular for the Christmas season. Enjoy a 30-minute ride through 17 miles of underground passageways. Featuring more than 850 lit characters with over 3 million points of light. Lights Under Louisville is open Nov. 13 through Jan. 3. For more information, visit www.lightsunderlouisville.com