FRANKFORT, Ky. — Lawmakers on Tuesday heard testimony about the need for a constitutional amendment to reform Kentucky’s restrictive local tax system, which business leaders say would make Kentucky cities and counties more competitive when it comes to economic development. 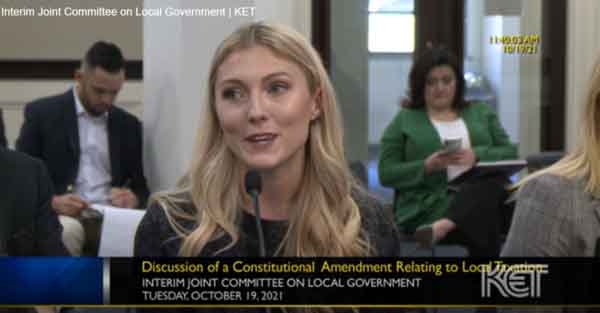 Check out GLI’s testimony to the committee meeting coverage on KET (starts at 1:36 running time).

Because of restrictions in Section 181 of Kentucky’s constitution, local revenue options are limited to mainly property, occupational, and a few fee and license taxes. These options create a system where Kentucky’s cities are reliant on taxing productivity instead of consumption, putting cities at an economic disadvantage when competing with peer markets with more options for local taxes, GLI said.

GLI advocates that legislators take the first step to correct this barrier by passing a constitutional amendment, that Kentucky voters would then vote on in the next election, to allow the General Assembly the opportunity to rethink local taxation.

GLI’s advocacy staff is also working with lawmakers and interest groups from across the state to advocate for comprehensive state tax reform in the upcoming session.