(CENTRAL KY. MARKET REVIEW) — Progress in renewable energy and reducing emissions of carbon dioxide in the coming decades is a priority with the U.S. government, and Kentucky utilities are continuing to do their part in that area, as evidenced by recent initiatives and projects.

Construction is complete and two new sections of LG&E and KU’s Solar Share facility in Simpsonville are now fully operational and producing energy for subscribing customers. Thanks to subscribers of sections three and four—which include more than 1,300 LG&E and KU residential customers and several business customers—development of the Solar Share site is now 50% complete. Both sections consist of 1,150 solar panels.

The subscription-based Solar Share program is a cost-effective option available to the utilities’ residential, business and industrial customers who want to support solar energy for as little as 20 cents per day.

“Watching the site develop and knowing it is a direct result of our customers’ interest and participation has been both exciting and rewarding,” said Eileen Saunders, LG&E and KU vice president–customer services. “We developed this program in response to their desire to support local solar generation and we’re pleased to continue helping all of our customer categories advance their personal and professional sustainability goals.”

When energy is produced by the facility, customers earn credits on their monthly bills based on their subscription level. By participating in the program, customers get the benefits from solar energy without having to pay the added up-front and long-term expenses that come when installing and maintaining a private solar system. Since July 2019, the facility has produced more than 2 million kilowatt-hours of renewable energy for participating customers.

A total of eight 500-kilowatt Solar Share sections are planned for the Simpsonville facility, for a total of 4 megawatts. Construction of each section is completed as it becomes fully subscribed. The utility is currently accepting enrollments for the fifth section, which is now nearly 80% subscribed.

In conjunction with parent company, PPL Corp., LG&E and KU are committed to achieving net-zero carbon emissions by 2050 as part of efforts toward a sustainable energy future. It is targeting an 80% reduction from 2010 levels by 2040 and a 70% reduction by 2035.

LG&E-KU, in partnership with the University of Kentucky Center for Applied Energy Research (CAER), has launched an innovative program to study capture of carbon dioxide emissions at natural gas combined cycle power plants.

The goal is to develop a flexible, net negative CO2 emissions technology that will be directly applicable to natural gas combined-cycle power generation while minimizing the associated capital costs of installing the technology. In addition to capturing CO2, the system will produce two value-added streams—hydrogen (H2) and oxygen (O2)—which can be sold to offset the cost of CO2 capture.

“Being able to improve the lifespan and efficiency of natural gas combined-cycle power plants while simultaneously achieving negative carbon dioxide emissions will have a profound impact on Kentucky’s energy industry,” said Kunlei Liu, associate director for research at CAER and an associate professor of mechanical engineering in UK’s College of Engineering.

East Kentucky Power Cooperative (EKPC), whose owners consist of 16 electric cooperatives as well as 1.1 million customers in the central and eastern parts of the state, has instituted a sustainability plan with goals of reducing carbon dioxide emissions 70% by 2050 based on 2010 emissions.

Among other things, the plan establishes a framework to develop strategies to increase fuel diversity and promote environmental stewardship; ensure EKPC is working closely with its 16 owner-member electric cooperatives to meet their changing needs; and attract and retain employees with the knowledge and skills to meet Kentucky’s energy needs.

“We must focus on a shifting energy landscape, now and in the future, and this plan will be vital to helping our organization do that,” said EKPC President and CEO Anthony “Tony” Campbell. “This sustainability plan is a living, breathing document. As circumstances change, the plan will continue to evolve … .”

“We must recognize that we face shifting expectations from a growing number of stakeholders, including cooperative members, policymakers, lenders and others,” said Don Mosier, executive vice president and chief operating officer.”

Throughout the past year, EKPC has kept important work and projects on track despite challenges posed by the pandemic. Work has continued on $262 million in projects to ensure EKPC’s largest power plant, Spurlock Station, remains in compliance with tightening federal environmental rules. Improvements were completed at its Bluegrass and Cooper Stations.

The Kentucky Energy and Environment Cabinet has consistently reported that the state’s 434 public water systems produce excellent quality water and have a high rate of compliance with the Safe Drinking Water Act (SDWA) requirements.

One of the main providers is Kentucky American Water (KAW), which continues to invest in infrastructure projects such as $35 million worth of upgrades to its two water treatment plants in Lexington, and one at Jacobson Reservoir that was announced last summer.

Kentucky American Water has been awarded a 2021 Diversity and Inclusion Award from the Kentucky/Tennessee Section of the American Water Works Association for its outstanding commitment to an inclusive and diverse workplace. The company received the award at a ceremony in August during the Kentucky/Tennessee Water Professionals Conference, attended by nearly 1,500 water industry professionals.

Click the image below to see the full story, photos and advertiser messages. 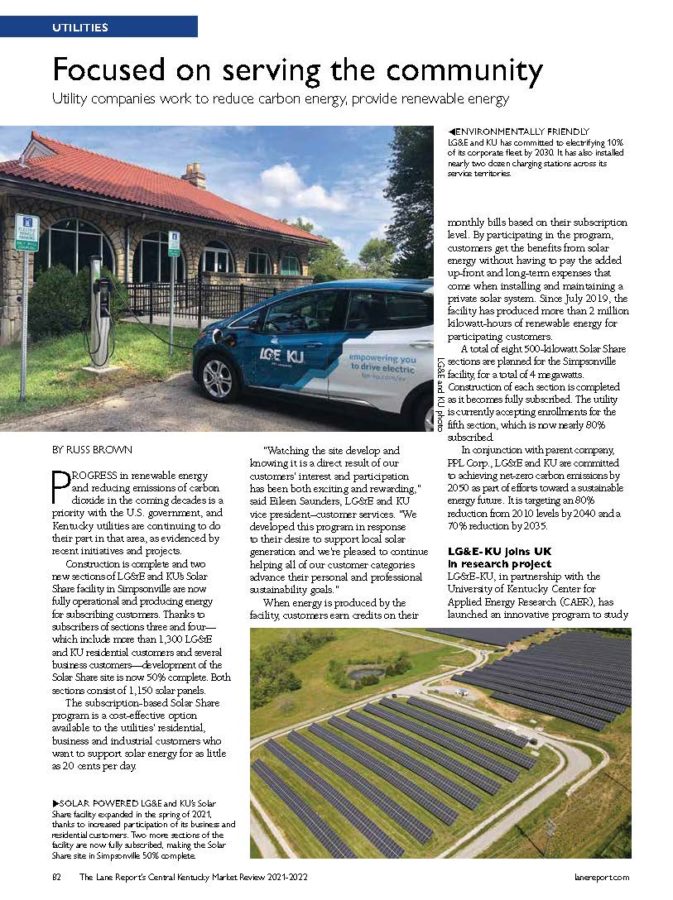