HEBRON, Ky. — BETA Technologies, a developer of electric vertical take-off and landing (eVTOL) aircraft and charging systems—which Amazon invested in through its Climate Pledge Fund—on Thursday performed a test flight of its ALIA electric aircraft between two Amazon Air Hubs in the Northern Kentucky/Ohio region, the first-ever test of an electric aircraft at Amazon facilities.

“BETA Technologies continues to take steps forward in electrifying the aviation industry and reducing its impact on our environment, and we are thrilled to have them conduct their test flight between two Amazon Air hubs,” said Sarah Rhoads, vice president of Amazon Global Air. “The ALIA test flight helped us continue to learn, as we stay committed to our long-term goal of transforming our transportation network into a zero-emissions fleet.”

In 2021, The Climate Pledge Fund made an initial investment in BETA Technologies as the company shares in Amazon’s vision to create zero-emissions transportation. One year later, Amazon has now made a second investment in BETA Technologies to continue to support their progress developing electric aircraft to one day serve the needs of various companies—as well as the planet. 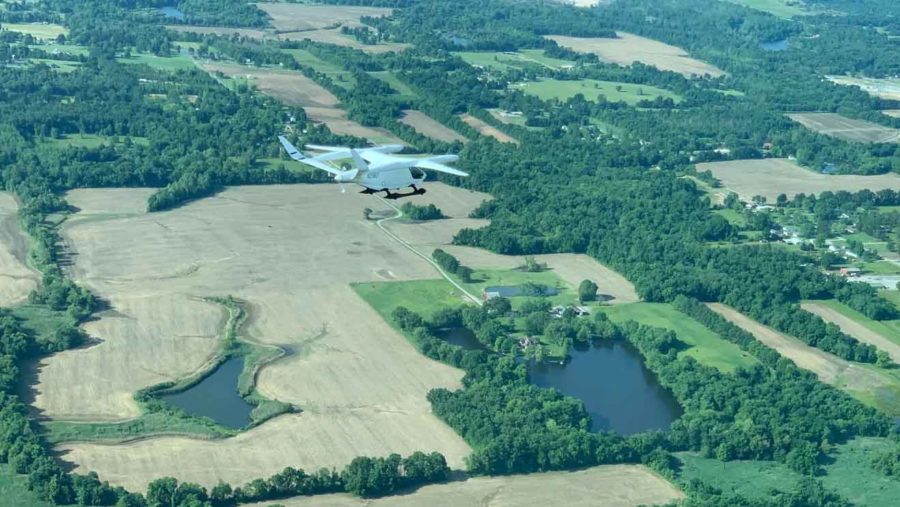 In recent months, BETA’s ALIA aircraft has materially expanded its flight test envelope. Most notably, BETA’s all-electric aircraft recently flew from the company’s flight test center in northern New York to northwestern Arkansas. The over 1,400-mile journey, recharging on the company’s own charging infrastructure, was an opportunity to gain practical experience with the ALIA. The mission saw ALIA fly through six states including New York, Ohio, Indiana, Illinois, Missouri and Arkansas.

“Over the past year, we’ve significantly expanded our flight test program to include market survey flights with customers, conducting several successful real-life missions,” said Kyle Clark, founder and CEO of BETA Technologies. “Flights like these are not just an exciting and informative step forward for our program, but they also prove the viability of electric aviation and show that this technology is capable of operating with the variables of cross-country flying and in the National Airspace System.”

“CVG is actively engaging in advanced air mobility, partnering on this work with Airports Council International, FAA, NASA and FlyOhio,” said Candace McGraw, chief executive officer at Cincinnati/Northern Kentucky International Airport. “We are proud of the work being done in our region by partners like Amazon and BETA Technologies performing revolutionary flights, such as the one today with ALIA electric aircraft, at CVG. Our geography and airspace lends well for this important work and we are excited to see continued progress in this forward-leaning technology.”

Amazon is dedicated to becoming net-zero carbon by 2040 as part of its commitment to The Climate Pledge which it co-founded in 2019. To date, the Climate Pledge Fund has invested in more than 18 companies working to solve climate problems with innovation solutions.