LOUISVILLE, Ky. (Jan. 3, 2018) – Six months away from its scheduled opening, the Novak Center for Children’s Health at the University of Louisville Health Sciences Center continues its rise over South Preston Street.

Mike Materna and Chuck Denk of UofL’s Department for Planning, Design and Construction recently released an update to campus faculty and staff on the progress of the building, slated to open in July 2018.

The first new health care delivery facility constructed in the Louisville Medical Center in nearly a decade, the Novak Center for Children’s Health is a 176,000-s.f. building that will be home to the general, specialty and subspecialty pediatrics programs at UofL. This includes faculty physicians from UofL’s Department of Pediatrics as well as other departments throughout the UofL School of Medicine, including neurology, oncology-hematology, cardiology, surgery, ophthalmology and more. Faculty physicians at UofL practice with UofL Physicians.

The outpatient services of the Wendy Novak Diabetes Center, currently housed in the Children’s Hospital Foundation Building, will move to the facility. Norton Children’s Hospital also will provide care within the new building, including infusion and laboratory services.

Currently, the structure has many interior walls and floors in place, and finishes such as wall tiles and flooring are being laid. Electrical wiring is being installed, and interior painting is underway. A pedway bridge, linking the new building to the existing UofL Physicians Outpatient Center and the Chestnut Street Garage, is now partially enclosed and is being finished out as well. Messer is the construction manager for the project.

“We have made a lot of progress,” Materna said. “Just one year ago we were literally still ‘playing in the sand,’ as I called it, working on digging out the basement and the steam tunnel integration.

“We have hundreds of people working on this site every day no matter what the weather is. They have done a great job to get us to where we are now.”

Approximately 500 employees, residents and students will inhabit the building, and UofL officials expect nearly 120,000 patient visits per year in the new facility.

“We are providing a new medical home for our pediatric patients and their caregivers,” said Gerard Rabalais, M.D., acting CEO of UofL Physicians. “It is a home where we are bringing together nearly all of the services we provide to children in an outpatient setting with a true multidisciplinary approach.”

The Novak Center for Children’s Health is named in recognition of the outstanding support provided by David Novak, his family and the Lift-A-Life Foundation. Novak retired as chairman of Yum! Brands in 2000.

“David Novak and his family are helping us build the future of pediatric health care here in Louisville,” said Charles Woods, M.D., chair of the Department of Pediatrics and UofL Physicians-Pediatrics. “With their support, we will transform how we deliver care, with health care teams located in one space so they can meet simultaneously with patients and their families and avoid unnecessary inconvenience and delays.”

The Novak Center for Children’s Health is located on South Preston Street between East Chestnut and Muhammad Ali Boulevard. 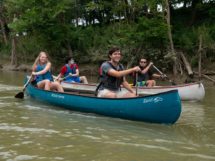