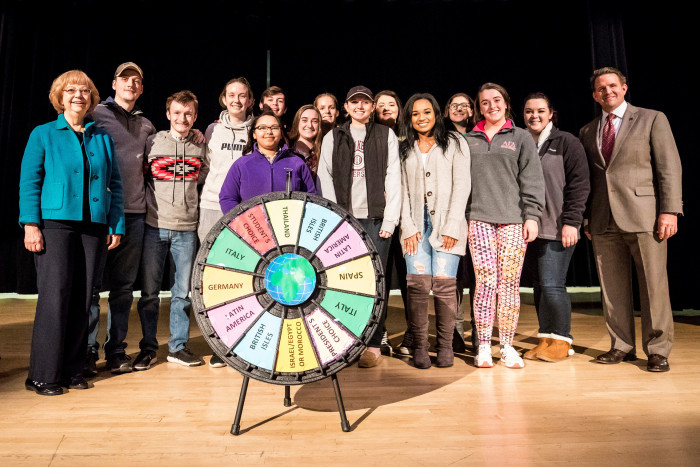 RICHMOND, Ky. (Feb. 2, 2018) — When Cameron Peyton’s name was announced Wednesday as a winner of an education-abroad scholarship at Eastern Kentucky University’s fifth annual Spin the Wheel Scholarship event, the junior international business/global supply chain management major from Lawrenceburg jumped from his seat, raced down the O’Donnell Hall aisle, eschewed the steps and took a flying leap to the stage.

Peyton was one of 17 fortunate recipients, each of whom will have all program costs and airfare covered by EKU. Other winners are headed to Great Britain, Latin America, Spain, Germany and Italy. But it’s safe to say no one reacted with such glee as Peyton, whose name was called last.

After Peyton’s wheel spin landed on Thailand, he immediately turned to hug EKU officials on the stage – President Michael Benson and Interim Provost Dr. Deborah Whitehouse, among others.

Once off the stage, he began to share the good news via cell phone calls to his mother, girlfriend, “everybody.”

“I don’t know if I could have paid for it or not,” said Peyton, who was already looking at options for a study-abroad experience this summer. “(Thailand) is different from the other places. I’m so excited,” and looking forward to the cultural immersion and real-life application.

Approximately 500 students were eligible to have their names called and spin the wheel for a destination. Most were packed into the Whitlock Building auditorium – the largest crowd ever for the event.

As he has done in past years, Benson shared how his education-abroad experiences shaped his life and career. “My world view, my appreciation for different perspectives, values, cultures and beliefs, was transformed by those experiences,” he said.

Other winners this year, their hometowns and study-abroad destinations are:

The experiences, some of which involve EKU faculty, are organized through the Kentucky Institute for International Studies (KIIS), the Cooperative Center for Study Abroad (CCSA), University Studies Abroad Consortium (USAC) and through EKU’s partnership with Accademia Europea di Firenze (AEF) in Italy.

During his remarks, Benson recalled the words of St. Augustine: “The world is a book, and those who do not travel read only a page.”

At least 17 EKU students might be inclined to write their own books after this summer.