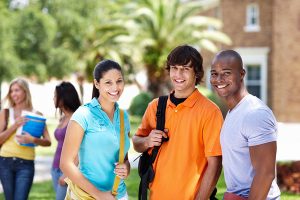 FRANKFORT, Ky. (July 11, 2018) — The Council on Postsecondary Education has a message for freshmen heading to college this fall: Take 15 credit hours your first semester and be nearly twice as likely to graduate on time.

That’s one of the key findings of a new CPE policy brief, “Momentum and Student Success in Kentucky: The Power of 15 Credits.” The report examines the impact of first-semester and first-year enrollment intensity on graduation rates, and offers best practices and policy recommendations.

On-time graduation is two years for an associate degree and four years for a bachelor’s.

The likelihood of timely graduation continues to improve for students earning 30 credit hours their first year. This holds true for students attending the colleges of the Kentucky Community and Technical College System (KCTCS) and the public four-year universities.

The report showed that full-time students pursuing associate degrees at KCTCS graduate at approximately three times the rate if they complete 30 credit hours their first year, compared to students who complete less than 30 hours.

For bachelor’s degree-seeking students at the state universities, the four-year graduation rate jumps from the overall rate of 28.9 percent to 60 percent for students who earned 30 credit hours their freshman year.

“The report’s findings are crystal clear. The prevailing notion that students might need to ease into college and take only 12-14 credit hours their first semester is clearly not the best approach for the vast majority of first-time, full-time students,” said Aaron Thompson, CPE executive vice president and chief academic officer.

“Academic momentum in the freshman year is a great predictor of student success at both the associate and bachelor’s degree levels,” he added.

Timely graduation provides other perks to students and their families, such as saving tuition costs of an extra year or two of college and the potential to graduate with less student debt.

In terms of closing achievement gaps, the report showed very positive impacts on graduation rates for underrepresented minorities, low-income and underprepared students at both the associate and bachelor’s degree levels.

Encouraging timely college completion is one of CPE’s “game changers” to help raise the state’s educational attainment of the working-age population to 60 percent by 2030.

To shorten time to degree, the report recommends:

Access the interactive charts for academic momentum at http://cpe.ky.gov/data/momentum.html.