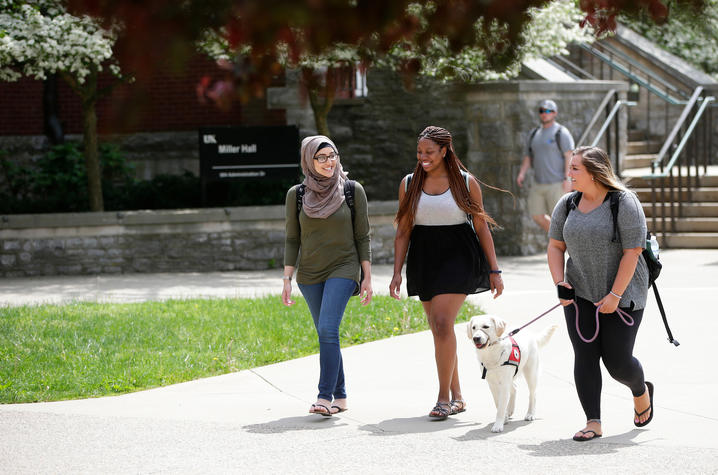 LEXINGTON, Ky. — For the second consecutive year, the University of Kentucky has received the Higher Education Excellence in Diversity (HEED) Award and further recognized as a 2018 Diversity Champion by INSIGHT Into Diversity magazine, one of only 15 universities nationally to receive the honor.

In addition, UK was recently declared a “Best of the Best” Top 30 LGBTQ-friendly collegeby Campus Pride. Annually, Campus Pride releases its list highlighting the campuses that are setting the highest standards nationally for LGBTQ-inclusion in policy, program and practice.

“The University of Kentucky is a place for all people. The multiple recognitions for our campus are important signals to those interested in joining this family,” said UK President Eli Capilouto. “But we do not make these investments and set these priorities for accolades. We do this because we know our campus thrives when it is a diverse community, celebrating the distinctiveness of our people. It’s because of the rich tapestry of background, culture, race, ethnicity, and lived experiences that Kentucky can achieve its highest aspirations.”

As a recipient of the annual HEED Award, a national honor recognizing U.S. colleges and universities that demonstrate an outstanding commitment to diversity and inclusion throughout their campus, UK will be featured, along with 95 other recipients, in the November 2018 HEED Award issue of INSIGHT Into Diversity magazine.

“Only the top 15 of the 96 institutions that were presented the HEED award this year also received the Diversity Champion designation. They are the best of the best this specific year. And to be named a Diversity Champion two consecutive years…well, that simply doesn’t happen frequently,” said Pearlstein.

“The University of Kentucky is a visionary leader among institutions of higher education striving for inclusive excellence throughout their campus,” she added. “As a Diversity Champion school, UK exceeds everyday expectations by developing successful strategies and programs that serve as models of excellence for other higher education institutions.” According to the stipulations of the honor, Diversity Champion institutions “exemplify an unyielding commitment to diversity and inclusion throughout their campus communities, across academic programs, and at the highest administrative levels. Known for visionary leadership, Diversity Champions are institutions that serve as role models and set the standard for thousands of other U.S. college campuses striving for inclusive excellence.”

Not long after being informed of the Diversity Champion designation, Feist-Price and Lance Poston, director of the Office of LGBTQ* Resources and director of Institutional Inclusion and Community Initiatives in the UK Office of the Vice President for Institutional Diversity, were notified of Campus Pride’s “Best of the Best” Top 30 LGBTQ-friendly college honor.

Annually, Campus Pride releases its list that highlights the campuses that received the “Best of the Best” listing. An institution must score the highest percentages in the LGBTQ-friendly benchmarks for policies, programs and practices. UK received five of five stars. For UK’s detailed “LGBTQ-Friendly Report Card,” visit https://www.campusprideindex.org/campuses/details/290?campus=university-of-kentucky.

“We are proud to be named one of the best of the best universities in the United States for LGBTQ* inclusion and support,” said Poston.

“This award is the culmination of work from our students, faculty, staff and alumni over several years,” Poston added. “The designation is yet another way we can communicate to future students and employees that the University of Kentucky is a place that values everyone and works to create a place of belonging for all Wildcats.”

This year, Campus Pride chose 30 campuses, including UK, based on their overall ratings on the Campus Pride Index and specific LGBTQ-inclusive benchmark measures.

Currently, including more than 330 campuses, the Campus Pride Index is the premier national benchmarking tool that self-assesses LGBTQ-friendly policies, programs and practices.

“LGBTQ youth and families want to know what campuses are doing about inclusive policies, programs and practices for four-year colleges and two-year colleges,” said Shane Windmeyer, executive director of Campus Pride and creator of the Campus Pride Index. “Campus Pride is proud of the growing number of campuses that are improving their LGBTQ campus climate and wanting to be the ‘Best of the Best’ each year.”

For the last decade, Campus Pride has been and continues to be a trusted, reliable educational resource for students and families to find the best campuses for LGBTQ inclusion and safety. Campus Pride is the leading national educational organization for LGBTQ and ally college students and campus groups, building future leaders and safer, more LGBTQ-friendly colleges and universities. The organization provides resources and services to thousands of college students and works alongside students, faculty, staff and administrators at more than 1,400 campuses annually. For more information, visit CampusPride.org/2018BestoftheBest.

INSIGHT Into Diversity magazine is the oldest and largest diversity publication in higher education today and is known for its annual Higher Education Excellence in Diversity (HEED) Award, the only award recognizing colleges and universities for outstanding diversity and inclusion efforts across their campuses. In addition to its online job board, INSIGHT Into Diversity presents timely, thought-provoking news and feature stories on matters of diversity and inclusion across higher education and beyond. Articles include interviews with innovators and experts, as well as profiles of best practices and exemplary programs. Current, archived, and digital issues of INSIGHT Into Diversity magazine are available online at insightintodiversity.com.