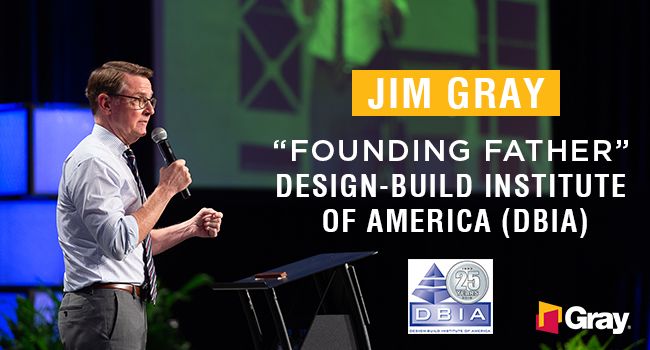 LEXINGTON, Ky. — Lexington Mayor Jim Gray, chairman of Gray Construction, was recognized as a founding father of the Design-Build Institute of America, an association dedicated to the design-build process.

“DBIA’s founding fathers were design-build ‘true believers’ at a time when many in the industry considered alternative delivery processes risky and a threat to the status quo,” said Lisa Washington, executive director/CEO, Design-Build Institute of America. “Twenty-five years ago, Gray Construction was already proving the naysayers wrong by delivering some of the nation’s best design-build projects, and Jim Gray was determined to expand those successes to all 50 states. It’s not often an individual can impact an entire industry; Jim Gray is one of those people. America has found a better way to build, thanks to his courage and insight.”

When these leaders came together 25 years ago, they had a mission – to expand design-build. The work has paid off since design-build is no longer an “alternative” project delivery method. The association is currently leading the industry to new heights.

“It’s so rewarding to see a 25-year-old vision develop to such an extraordinary level, proving that ideas are the DNA of everything that’s important,” said Gray.

Historically, more than 75 percent of Gray Construction’s projects utilize the design-build method with expectations of this number to increase.

The panel included a spirited discussion of the founders recalling fond memories of the early days as well as ideas for what the future could hold.

During the event, Gray was also recognized as a DBIA fellow.

University of the Cumberlands organizes annual Shoes 4 the Soul program