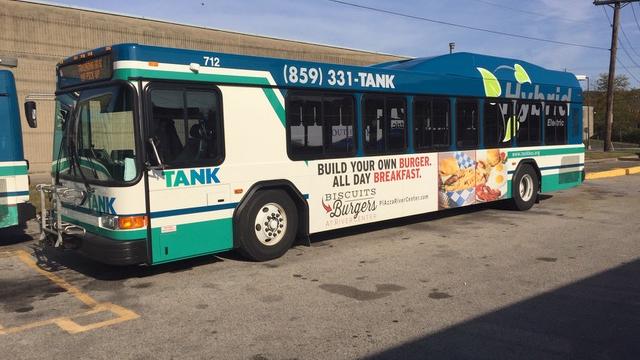 CINCINNATI, Oh. — Adsposure, powered by Advertising Vehicles, announced today it has entered into an exclusive contract with the Transit Authority of Northern Kentucky (TANK) to manage the advertising for TANK’s fleet of more than 100 fixed route buses, 30 on-demand paratransit vehicles and approximately 30 bus shelters. The contract took effect Nov. 1, 2018.

Under the terms of the contract, TANK keeps 52 percent of all revenue generated from advertising on TANK’s buses and shelters. Adsposure guarantees TANK a minimum of $2.2 million in earnings over the life of the seven-year contract, the last two years of which are optional.

“We are very excited about helping leverage TANK’s assets to drive results for our advertisers and revenue back to the transit authority,” said Ken Black, CEO of Adsposure. “Northern Kentucky is booming and it’s exciting to be able to play a role in helping the region’s businesses grow through out of home advertising,” he added.

Adsposure engaged in a competitive RFP process for several months to win the contract. According to TANK officials, Adsposure’s bid was overall the most attractive to the transit authority, which has served commuters in Boone, Campbell and Kenton counties and downtown Cincinnati for more than 30 years.

Adsposure, powered by Advertising Vehicles, also manages the advertising contracts for the transit authorities in Cincinnati, Des Moines, Kansas City, Lexington and Nashville. The contract with TANK is the 8th such contract for Adsposure in the past three years, and the 6th transit authority to join the company’s growing footprint.

For more information on advertising with Adsposure, or to learn more about untapped revenue opportunities for your transit authority, visit www.adsposure.com.