Home » Head of Kentucky pension system says reforms must be made to state retirement plans; issue can’t be fixed with money alone

FRANKFORT, Ky. — On the heels of a Kentucky Supreme Court decision overturning pension reforms and a special session to tackle the issue that ended without a solution, the head of the state’s largest retirement system says reforms must be made. And that funding alone will not solve the problem as there are more contributing factors than just underfunding of the systems.

In an interview with The Bottom Line, Kentucky Retirement System (KRS) Executive Director David Eager said reforms have to be made to the systems and stated he hopes the General Assembly will pass another reform bill in the 2019 session that also includes the level-dollar funding provision that would have ensured sufficient funding of the systems.

Eager said he believes the major reforms made to KRS in 2013 legislation which moved new hires into a different kind of retirement plan more like a 401(k) are working and will be a big part of solving the issue long-term. When asked if he feels the Kentucky Teachers’ Retirement System (KTRS) could benefit from a similar move for new hires as proposed in the 2018 pension reform bills, Eager said it takes a while to see the benefits of the new plan as it is a 30-year fix, but he does think it is beneficial.

“You know, we want to blame the governor and the legislature. It starts with KRS. We allowed economic assumptions to be in place and used by the actuaries…we allowed assumptions that were unrealistic,” Eager said (at around 7:00 in the video below).

The pension system head noted KRS had for many years assumed a 7.5 percent return on investments which was not met, expecting to bring in money from payroll growth at a rate of 4 percent while state government was shrinking, and other factors that led to the system not asking for enough money from the legislature.

When asked where the system’s funding percentage would stand if they had gotten their full contribution request each year from the legislature, Eager pointed to the county employee retirement plan as an example of a system that received the full required amount each year and noted that the system is only at 52 percent funded.

As a result, Eager said funding alone is not going to get the state out of the problem and while moving to a level-dollar funding formula and contributing more money over and above the actuarially required contribution are necessary, there are other issues beyond funding that must be addressed.

Hear Eager’s thoughts on the special session, funding issues facing KRS, additional reforms needed, what happens in the event of a market downturn, and more in the video below: 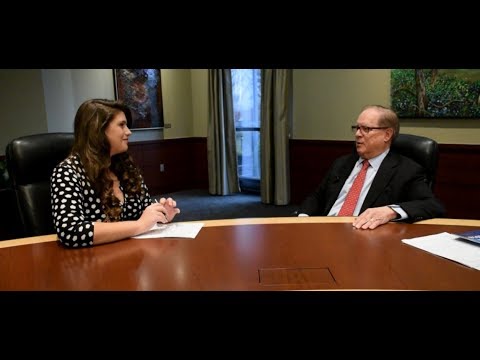 An audit was released Wednesday citing KRS had not been using accepted accounting practices and received $2.37 million in overpayments from employers.

When asked about the audit, Eager said the system often sees an over-reporting of revenue from state agencies, and when the system becomes aware of the overpayment to the retirement fund, the agency is notified and told to collect the excess payments from the system. He said the agencies frequently choose not to collect the money as it is often money from an employee that no longer works there. And in that case, the system keeps the money.

As for accounting and investments, Eager highlighted the system’s initiatives to become more transparent and the addition of experienced individuals in key positions in recent years which have helped the system see their 19 infractions in a 2013 audit decrease to three notes in this most recent audit.