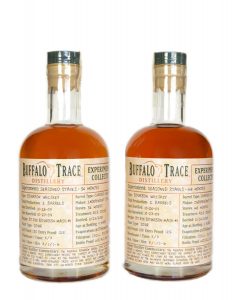 FRANKFORT, Ky. — Buffalo Trace Distillery is releasing its latest round in its experimental whiskey collection, two bourbons aged for more than nine years in barrels made from oak staves seasoned for three and four years.

The bourbons, filled with Buffalo Trace’s mash recipe no. 1, were put away to age on Oct. 27, 2009, in new barrels with staves that were seasoned for 36 months and 48 months. Most barrel staves air dry for six months, but these oak staves were allowed to season for much longer in hopes the barrels would offer a unique flavor, different than standard barrels.

“Although the taste difference is slight between the two experiments, these whiskeys taste different than our flagship Buffalo Trace bourbon,” said Master Distiller Harlen Wheatley. “The 48-month seasoned stave barrels created a more mellow taste and holds less flavor from the wood. The 36-month seasoned stave bourbon is a little more flavorful with oak notes and caramel present.”

These bourbons will be sold in a two pack case, so consumers can evaluate the two and compare taste differences for themselves.  Each bourbon has been bottled at 90 proof.

The Experimental Collection is packaged in 375ml bottles, and each label includes all the pertinent information unique to that barrel of whiskey. These whiskeys retail for approximately $46.35 each and will be available in late February 2019.  Experimental Collection releases are generally quite small and have limited availability.