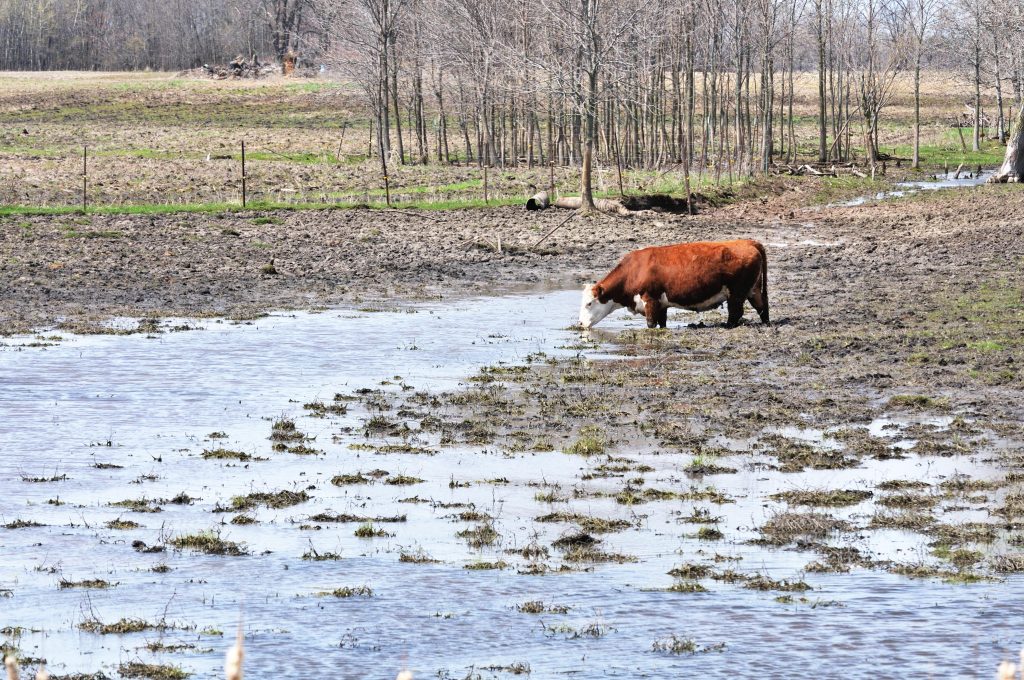 LEXINGTON, Ky. — 2018 was Kentucky’s wettest year on record, and the new year seems to be more of the same. This means most livestock producers are dealing with less than ideal conditions, and cattle are showing signs of stress.

“It is important to understand this winter has been relatively easy temperature-wise but difficult for cattle in Kentucky,” said Michelle Arnold, ruminant extension veterinarian for the University of Kentucky College of Agriculture, Food and Environment. “Cows of all ages are losing weight now at levels typically seen in late winter.”

“Hay quality is also exceptionally poor this year, as much of it was cut very ripe, rained on while curing and baled with enough moisture to support mold growth,” Arnold said.

Winter feeding programs on many farms aren’t enough to support cattle this year, especially those in late pregnancy or early lactation, or their newborn calves, even though bitter cold hasn’t been a factor to this point.

Arnold explained that cattle have several defenses against cold, the first of which is their hair coat. The coat grows longer in the winter and helps conserve heat and repel cold. If an animal’s coat cover is wet and muddy, its energy requirements can easily double, especially if the animal has no wind protection.

“Energy from intake of hay that is adequate for maintenance in normal years is falling far short of the requirement this year,” she said. “Cold conditions are not too difficult for cattle, but when rain and wind are added, heat loss is multiplied several times by the effects of conduction and evaporation. Under these circumstances, the ‘wind chill factor’ referred to by the meteorologist has real meaning to a cow.”

To combat this, producers need to supplement cattle with adequate energy and protein sources. Hay of unknown nutritional quality often does not provide enough nutrition to meet the animal’s basic requirements. This will result in depletion of body fat stores, followed by breakdown of muscle protein and finally death due to insufficient nutrition.

“Typically, near the end of most winters, both veterinary diagnostic laboratories in Kentucky receive older beef cows for necropsy,” Arnold said. “This winter, malnutrition cases include young cows and pre-weaning/weaning age calves, indicating serious nutritional deficiencies in the feedstuffs, especially the hay produced last summer. The producer may first notice a cow getting weak in the rear end. Later she is found down and is unable to stand. Death follows within a day or two after going down. Multiple animals may die within a short period of time.”

At necropsy, the pathologist may find a thin animal with no body fat stores, but the rumen is full of bulky, dry forage material which is poor quality hay. Even the small seam of fat normally found on the surface of the heart is gone, indicating the last storage area in the body for fat has been used up.

Despite having had access to free choice hay, these cattle died from starvation. Although hay may look and smell good, unless a producer tests the hay for nutritional content, he or she does not know the true feed value of that harvested forage.

“It is often difficult for producers to bring themselves to the realization that cattle can actually starve to death while consuming all of the hay they can eat,” Arnold said.

She also encouraged producers to look at their mineral supplementation, as copper and selenium levels have been far below acceptable levels this year. Deficiencies can lead to multiple problems, and it’s best to address them before they get to that point.

“We want producers to understand how important it is to test their hay. It is simple, inexpensive, and the results are easy to interpret,” Arnold said. “Your local Cooperative Extension Service office can help you. Other than that, review your nutrition program, and if your cows are losing weight, consider supplemental feed to get them through the rest of the winter.”

UK beef specialists Kevin Laurent, Jeff Lehmkuhler and Roy Burris created an online supplemental feeding tool at http://forage-supplement-tool.ca.uky.edu/, where producers may enter hay test values and stage of production to help find appropriate supplements for many operations. Producers should still monitor intake and body condition through the winter and make sure cattle have clean drinking water and access to a complete mineral supplement.