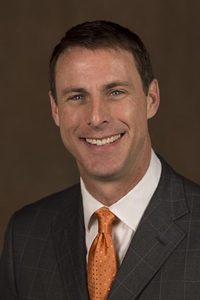 “It’s a thrill for me to be named the head coach at Northern Kentucky,” said Horn. “It was a job I’ve had my eye on for a while now. There is great momentum and energy surrounding both the basketball program and university. Norse Basketball is a winning program with players who know what it takes to win. I am impressed with the vision that both Ken (Bothof) and President Vaidya have for the program and university. My family and I can’t wait to join the Norse family and Northern Kentucky community.”

“I am pleased to welcome Darrin, along with his wife Carla and children Caroline and Walker, to Northern Kentucky University,” said Bothof. “Throughout the hiring process, it became clear that Darrin was the right fit to lead the Norse men’s basketball program. Not only does he have ties to Kentucky from his prep and collegiate playing days, but he’s also been a successful head coach at Western Kentucky.”

Horn is coming off four seasons at Texas, having served the last season as the program’s associate head coach. During his tenure at Texas, the Longhorns went 71-66 and won the 2019 NIT. Horn had the primary responsibility of developing Texas’ front court and has seen two players move onto the NBA, as Jarrett Allen was the No. 22 pick by the Brooklyn Nets in the 2017 NBA Draft while Mohamed Bamba was the No. 6 pick by the Orlando Magic in the 2018 NBA Draft. Jaxson Hayes, the 2019 Big 12 Freshman of the Year, is projected to be a first-round draft pick this year.

A native of Glasgow, Ky., Horn played at Western Kentucky from 1991-95. From there, he made assistant coaching stops at his alma mater, Morehead State and Marquette before serving as the head coach at both Western Kentucky and South Carolina. As the head coach at WKU, Horn led the Hilltoppers to a 111-48 record from 2003-08, culminating in Sun Belt Conference regular-season and tournament titles and a trip to the NCAA Sweet 16 in 2007-08.

During his time as a player, Horn was a part of four 20-win seasons, two Sun Belt Conference championships and a pair of Sun Belt Tournament Titles. He amassed 1,115 points and 139 steals in his career and is one of three players to help the Hilltoppers reach national postseason play in four consecutive years with one NIT appearance and three NCAA Tournament berths.