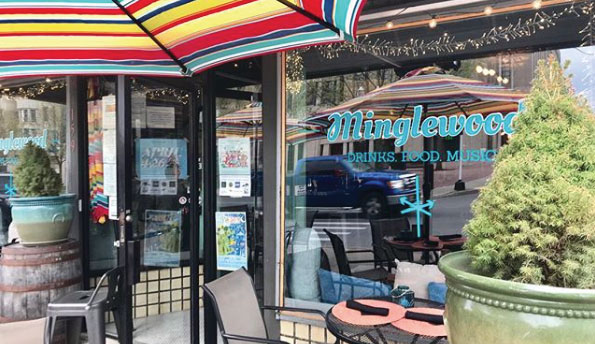 Mindfulness, sustainability and world cuisine may seem like an odd combination, but all of these practices (and flavors) come together at Minglewood, a unique restaurant and social hub across from the courthouse complex in downtown Lexington.

Owned by Trish Trungate, former owner of The Dish, Minglewood features flavors inspired by Trungate’s many visits to the Caribbean, with her own personal touch added. Dishes range from a fried chicken hot brown to wings covered in an orange teriyaki sauce with bleu cheese and Phish sticks – named after the iconic jam band and featuring catfish dredged in an onion habanero hot sauce puree with pickled vegetable tartar sauce and slaw. According to Trungate, some of the combinations may seem perplexing, but the flavors they present will leave your mouth watering for more.

Another unique element of Minglewood’s menu that helps it stand out amid a crowded downtown Lexington food scene is its cannabidiol-infused cocktails. The drinks come in two flavors, the first being Sour Diesel, a play on the whiskey sour and featuring Jim Beam Double Oak Bourbon, fresh tangerine honey juice, sour lemon and CBD. The other is Cucumber Haze, which featured organic cucumber vodka and lemon, topped off with CBD, which according to Trungate adds an herbal note to the drinks.

The special cocktails have also helped at least one customer begin the path to recovery from chronic pain. Recently a customer complaining of chronic back pain for nearly two decades had two of the cocktails, according to Trungate, then went home and slept the best he has since the pain began. He implemented CBD into other aspects of his life for the pain reduction and muscle relaxation they yield, improving his overall quality of life.

However, perhaps the biggest happening getting people to mingle at Minglewood has been a local plastic-straw ban that Trungate has been advocating. The campaign started as a one-month challenge in late 2017, when Trungate asked other businesses on her downtown block to #DontSuckInDecember. Nearby businesses such as Corto Lima, SideBar and Sam’s Hot Dog Stand answered the call, and the campaign helped ignite a conversation about sustainability and being eco-friendly, not just while taking in a night on the town but at home as well.

She partnered with Maker’s Mark last year on a nationwide campaign, signing 25 local partners for the program in less than 48 hours. In addition, Minglewood was the first Lexington restaurant to become Green Check certified by the city, in recognition of its sustainability efforts. Trungate says her goal for 2019 is to eliminate single-use plastic wrap around the restaurant.