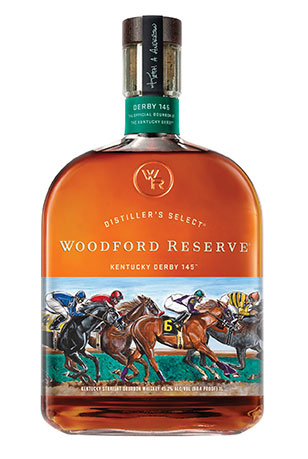 In Kentucky, the month of May always starts off with the celebration that is the Kentucky Derby, often dubbed “the greatest two minutes in sports.”

For the last 20 years, Woodford Reserve, the presenting sponsor of the Derby, has created a commemorative Derby bottle that has become an annual collectors item anticipated by bourbon and racing fans. To honor that milestone, the Frazier History Museum in Louisville – the official starting point of the Kentucky Bourbon Trail – has unveiled a special yearlong exhibit that features all 20 Derby bottles and the original artwork used to design the labels, along with other Derby artifacts.

“The Woodford Reserve & the Kentucky Derby: Two Decades of Artistry, Bourbon and Horse Racing” exhibit is housed within The Spirit of Kentucky, a large permanent exhibition about the history, craft, and culture of Kentucky bourbon that the Frazier opened last August.

“The Frazier Museum is the where the world meets Kentucky,” Frazier President and CEO Penny Peavler said. “So we and our partners at Brown-Forman are eager to celebrate the two industries for which Kentucky is world-famous: horse racing and bourbon whiskey.”

The limited-edition 2019 Woodford Reserve Derby bottle features the colorful artwork of Keith Anderson and showcases Thoroughbreds racing across the front. This is the second year that Anderson, who works in the Bourbon Street Café at Brown-Forman headquarters in Louisville, has been chosen to have his work featured on the collectible annual release.

“My vision for this year’s Derby bottle came to me on Derby Day in 2018, when I was at Churchill Downs watching the horses race past me,” Anderson said. “Their sheer power, their colors and the jockeys are seared into my mind — and now featured on the bottle.”