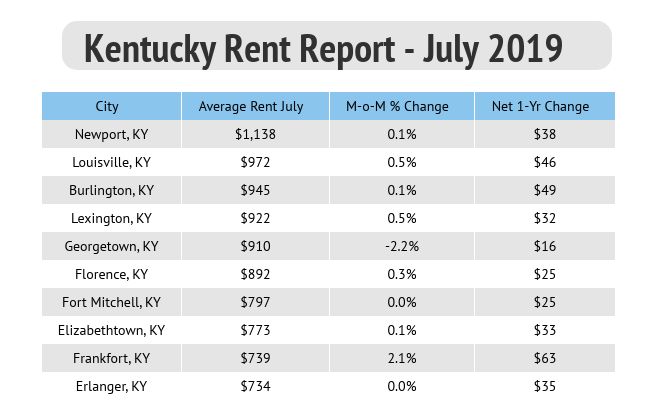 The average rent in Louisville clocked in at $972 per month, a $5 net increase since June, and $46 above what renters were paying a year ago. Lexington hit $922 this July, up by 3.6% year over year.

The average rent in Kentucky cities is lower than the national average rent, the latest National Rent Report from RentCafé found.

The slowest rising rents were in Georgetown, where prices increased by 1.8% ($16) compared to July last year and actually decreased in July compared to June.

Nationally, the average rent went up by 3.4% year-over-year, reaching $1,469 in July. Overall, renters had to pay $48 more than they did at the same time last year, according to the latest rent survey from Yardi Matrix. However, July also displayed the slowest month-over-month increase since February, which at 0.2% is a clear signal that peak rental season is nearing its end. The trend is in line with last year’s data – once the busy late spring to early summer period winds down, rents are expected to slow their growth throughout the rest of the year.

The figures come from RENTCafé, a nationwide apartment search website and a part of Yardi, which provides original research, insights and in-depth analysis of the U.S. real estate market.

More highlights from the Kentucky Rent Report compiled by RentCafe:

• Newport apartments are the state’s most expensive for renters, with an average rent of $1,138/month. On the other hand, the cheapest city to rent an apartment in is nearby Erlanger  at $734 per month.