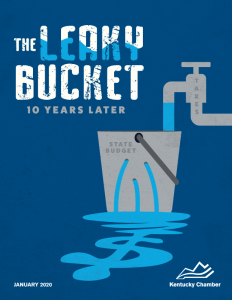 FRANKFORT, Ky. — Kentucky continues to struggle to slow state spending in key areas that are diverting funds from investments in education, according to a new report from the Kentucky Chamber of Commerce.

The Leaky Bucket: 10 Years Later, released Tuesday, is an update of the chamber’s original report that identified corrections, Medicaid and public employee benefits as major budget leaks that were consuming tax dollars at a rate that was growing faster than the overall state budget. These leaks accounted for more than half of all growth in the budget from 2000 to 2010, with money being allocated to them at a much higher rate than for education.

Since the first Leaky Bucket was published, several bipartisan policies have been enacted in an effort to curb the disturbing spending trends and, for a while, it appeared that the policies might slow, if not stop, some of the leaking.

“Unfortunately, this has not been the case,” said Chamber President and CEO Ashli Watts. “With the opioid epidemic plaguing our state and the resulting growth in the prison population, escalating costs associated with Medicaid, and continuing challenges with the pension systems, Kentucky is still struggling to fix the leaks.”

“The commonwealth cannot reform or cut its way out of current funding challenges without falling further behind in areas critical to our future,” the report noted. “We must ‘look beyond the bucket’ to generate additional revenue. Kentucky needs pro-business tax reform that improves the commonwealth’s competitiveness while producing new net revenue to support education and develop a modern workforce.”