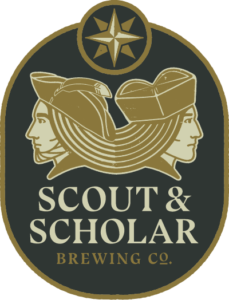 In addition, the brewery will sell limited-edition growlers, hats and T-shirts commemorating the event, with all proceeds going to support local, small businesses impacted by COVID-19.

“We could not think of a better way to commemorate the release of our first beers,” said Donald Blincoe and David Dones, co-founders of Scout & Scholar. “Giving back to the community that has given us so much over the years is part of our core mission at Scout & Scholar Brewing Company.”

Named after the two brothers who founded the city of Bardstown, Scout & Scholar celebrates the legacy of William and David Bard and the important role Bardstown played in shaping Kentucky and American history.

William Bard, the “Scout,” was a surveyor, land agent, and frontiersman, who surveyed and laid out Bardstown in 1780. He also drew the first lots of Louisville for the “lottery” conducted on April 24, 1779. David Bard, the “Scholar,” graduated from Princeton College, studied theology, and became a Presbyterian minister. He was elected to Congress and served from March 4, 1795, to March 3, 1799, and again from March 4, 1803, until his death.

“What a wonderful way to recognize such a great addition to Bardstown’s Historic District,” said Kim Huston, president of the Nelson County Economic Development Agency and Bardstown Industrial Development Corporation. “Businesses and people supporting each other are what Bardstown, Kentucky is all about.”

With an anticipated opening date in October 2020, Scout & Scholar Brewing Company is the first craft brewery in Bardstown that will not only produce exceptional craft beers but will also offer a full-service restaurant and bar. Scout & Scholar’s scratch kitchen will combine local ingredients with regional flair.

“My approach to brewing is to explore traditional styles, while at the same time continually pushing the envelope,” said Northcutt. “I look forward to bringing craft beer to Bardstown and being a new addition to the Kentucky Craft Beer Scene.”

Scout & Scholar’s kitchen and overall operation are run by Caleb Sunderman, formerly chef at 610 Magnolia and Sous Chef de Cuisine at Milkwood in Louisville. Caleb attended Sullivan University, was a member of the Sullivan Culinary Team and worked with the Bluegrass Brewing Company.

“Scout & Scholar is a place that will bring the community together,” said Caleb Sunderman, general manager, Scout & Scholar. “To that end, we’re looking forward to supporting Bardstown’s small business community now by raising money to help support those impacted by COVID-19.”