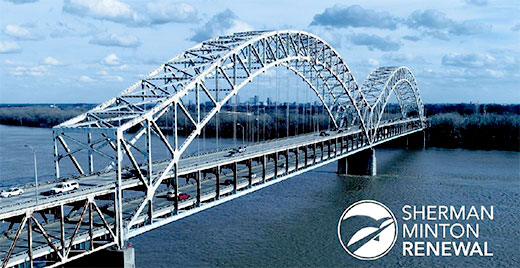 LOUISVILLE, Ky. — The Sherman Minton Renewal project team unveiled its plan for a preferred alternative for construction while it works on the 57-year old bridge between downtown Louisville and southern Indiana, starting in 2021.

Input from community leaders, elected officials, business owners and the general public led the project team to develop a plan that will minimize the impact of the major restoration project on traffic flow. The bridge will remain open with at least one lane of traffic in each direction for nearly 95% of the three-year construction process. Full closure of the bridge will be restricted to only 54 total days of the estimated 843 days of work.

The Preferred Alternative reflects the public’s preference for maintaining access across the bridge to the fullest extent possible during construction.

Here are some further details about the recommended approach:

The Sherman Minton Renewal project team also released the Environmental Document required by the National Environmental Policy Act (NEPA). It is viewable on the project website (shermanmintonrenewal.com), or in person at the following locations:

The public will have until Aug. 15 to submit comments on the plan, which can be done by going to shermanmintonrenewal.com/contact-us , by calling (502) 329-8320, or by completing a comment card at any of the above locations. After considering additional comments, the states will confirm the Preferred Alternative.