Home » Seizing the Opportunity: Logistics firms busier than ever during pandemic 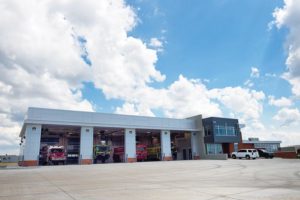 It’s nearly impossible to find any tangible upside to the worldwide pandemic that has claimed hundreds of thousands of lives and infected millions of people.

But at Lexington’s Blue Grass Airport, the substantial decline in passenger travel that’s linked directly to COVID-19 has at least provided the staff and its contractors a chance to catch their collective breaths and focus on some major capital improvements at one of the region’s primary economic drivers.

“We have quite a few projects that we recently have completed,” said Amy Caudill, director of marketing and communications for the airport. “Being that this is a slower time for us, we are at least trying to take advantage of being able to construct some new facilities while not having much of an impact on our customers.”

A couple of the projects involve major overhauls of at least two of the dining and drinking establishments in the terminal, she pointed out.

“If we have to close down a restaurant (for example), it doesn’t have as much impact on passengers as it might have had previously, so it gives us a little more flexibility to get these projects completed,” Caudill said.

Capital improvements that are either completed or underway include the 345-space expansion of the long-term parking lot to just under 1,000 spaces, a $5.8 million project, as well as a covered walkway between that parking lot and the terminal, and a $15 million aircraft rescue and firefighting facility to replace one that was demolished to clear the way for a $66 million taxiway improvement and expansion. The new firefighting facility has been completed and the taxiway project is slated to be finished by the end of the year, Caudill said.

The airport, which handled nearly 1.5 million passengers last year, was on pace before the pandemic to set a ninth consecutive record for air travelers, said Caudill, who added that air traffic has “decreased considerably,” although no numbers were available in late August.

In September, the airport announced it will begin offering seasonal, nonstop flights to Miami between the months of November and April.

While the airport reported a decline in its passenger numbers, other businesses in the transportation and logistics category in the central part of the state reported some unexpected spurts in demand for their services.

One vitally important factor for logistics and transportation industries is Kentucky’s location. Situated at the crossroads of I-75 and I-64, two major interstates, the Bluegrass State is within a one-day drive of 34 states and 65% of the U.S. population.

“Because of our multi-modal infrastructure, we’re very fortunate that we stay connected to the globe with our products, our manufacturers and our location,” said Gina Greathouse, executive vice president of economic development for Commerce Lexington, the city’s chamber of commerce. Lexington’s location is vitally important, she said.

The presence of Amazon Prime, the region’s infrastructure and the sophisticated supply chain and logistics networks put the region in a “good position” compared to other metro areas when the pandemic peaked, said Bob Quick, president and CEO of Commerce Lexington.

At W.T. Young Storage Co., one of the largest distribution organizations in the Lexington area, about 65 employees were routinely working 50-60 hour weeks when grocers and other retailers couldn’t keep their shelves stocked, said James Pierce, vice president and chief operating officer.

“We were extremely busy with outbound shipments from mid-March into May,” said Pierce, whose company owns some 3 million s.f. of warehouse space and whose clients include the Kroger grocery chain, International Paper and J.M. Smucker’s. Grocery business increased by 50% from mid-March until the end of April, he said.

At Lexington’s Longship, a logistics company that matches truckers with shipments all over the country, restaurant and school business declined substantially while superstore and grocery business increased, said Thomas Kinder, general sales manager.

“Some areas slowed down and some picked up. I think it will kind of balance out (for the year),” Kinder said.

Because some trucking companies and independent truckers shut down during the pandemic, demand increased for those that were still on the road, which drove up the rates, Kinder said.

Since 2010, Amazon has invested more than $15 billion in Kentucky through its customer fulfillment and cloud infrastructure, and compensation to its employees, a spokesman said in
an email.

Those investments contributed $12.9 billion into the economy and created 23,000 indirect jobs in addition to the 14,500 Amazon employees in the state. Some 2,700 of those jobs are in Lexington and seven nearby counties, according to Commerce Lexington.

Earlier this year, as the COVID-19 pandemic began to grip the U.S., Amazon hired 1,700 workers in Kentucky who were considered “seasonal” employees. Since then, 1,400 of those jobs have been reclassified as full-time positions, the company spokesman said.

Like Amazon, FedEx declined to talk about its substantial operations in Lexington, but did comment generally about how business has increased companywide during the COVID-19 crisis.

“FedEx Ground continues to experience a surge of package volume due to e-commerce growth … during this pandemic. Throughout our network, the average daily number of packages delivered for the quarter ending May 31 increased 25% over the same period a year ago,” David Westrick, a Fedex spokesman, said in an email.

“Since March, FedEx Ground has hired tens of thousands of package handlers and service providers have onboarded thousands of drivers in targeted markets. The pace of hiring continues as we manage ongoing demand for our services and prepare for the coming peak season,” Westrick added.

Increased demand for consumer packaged goods and an uptick in online ordering led to a flurry of activity at Verst Logistics in Northern Kentucky, which ships products all over Kentucky and the rest of the U.S., said Paul Verst, chairman and CEO. Verst’s core businesses of warehousing, transportation, contract packaging and e-commerce fulfillment have all seen increased growth, he said.

“Our customers tend to be in key verticals of consumer durables and light industrial packaging and ecommerce,” Verst said. “Verst has seen huge growth of volume with our customers during COVID-19.”

The company employs 1,900 people at 23 locations in Northern Kentucky, Alabama, Arizona, Indiana and Ohio. During the pandemic, Verst has hired additional workers and plans to hire more, but has faced staffing challenges.

“The biggest challenge we’ve faced is finding employees to fill our openings,” Verst said. “The increased unemployment benefits had many potential candidates sitting on the sidelines.”

Like the airport on a smaller scale, Lextran has seen bus passenger volume plummet during the pandemic. The city’s transportation system made a long list of changes in its network when businesses shut down and the number of work-bound commuters decreased dramatically.

On a year-to-year basis, the bus system had 500,000 fewer trips for the fiscal year that ended June 30, according to a report that was presented to the Lextran board in July.

For July, the first month of the current fiscal year, ridership was up 10 percent over the numbers for June but down 38 percent to 173,700 when compared to July of last year.

Numbers for the second half of last year as well as the early part of this year were encouraging, according to Emily Elliott, who handles community relations for the bus system.

“We were actually up from the previous year and then they took a dramatic dip when COVID-19 really started to hit us,” Elliott said.

The bus system didn’t shut down during the pandemic, but it did take extraordinary measures that included eliminating fares in mid-March, a policy that continued well into August. Lextran also trimmed bus capacity by half and allowed passengers to board through the back door to enhance social distancing, Elliott said.

Buses were cleaned using an electrostatic system overnight and spot cleaned during the day, Elliott said. Some routes and schedules were altered during the pandemic, and in late August, two routes had been shut down temporarily.

In Madison County, the I-75 project at the KY 627 interchange – which calls for reconstruction at Exit 95 – is scheduled for completion at the end of September or early October, according to Natasha Lacy, public information officer for District 7 of the Kentucky Department of Highways.

The New Circle Road widening project that began in May of last year and runs for 1.3 miles between Georgetown Road and Boardwalk is scheduled for completion by the end of the year. Pouring the deck for the Georgetown Road bridge deck is expected to take place in September, Lacy said.