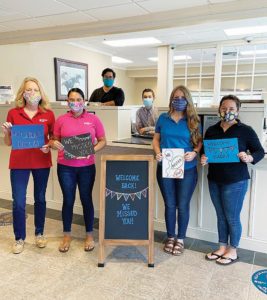 It wasn’t that long ago when walking into a bank while wearing a mask might have prompted a teller to hit the panic button and alert the security guard on duty.

My, how times have changed.

Banks that opened their lobbies during the COVID-19 pandemic often required customers to wear a mask, sanitize their hands, social distance while standing in line, and then transact bank business through a plexiglass shield and/or a face mask.

Throughout Central Kentucky, staffing levels and hours of operation varied widely from bank to bank.

Indiana-based German American Bank, which has grown quickly in Kentucky in just two years, said roughly half its 800 employees nationwide worked from home during the peak of the crisis. A smaller fraction of employees at Central Bank and Forcht Bank worked remotely.

Regardless of where bank employees created a workspace, one thing was consistent: Throughout Central Kentucky, elsewhere in the state and all over the country, banks answered thousands of questions about the financial impact of COVID-19 over the last few months and completed much of their work on two rounds of the federal government’s Paycheck Protection Program.

Based on interviews with a cross section of bankers in and around Lexington, it’s clear that COVID-19 and its impact influenced nearly every phase of the financial services industry in Central Kentucky.

One exception was a huge merger that may reconfigure competition for financial services throughout the state.

Last December, the $66 billion combination of BB&T and SunTrust created Truist Bank, which has 80 offices in Kentucky and ranks sixth in the country, with assets of $495 billion. In the PPP loan program, Truist ranked fourth nationwide by handling some 82,000 loans with a value of $12.6 billion, according to the U.S. Small Business Administration.

Several banks reported that the pandemic forced them to rely more and more on technology because of the risks associated with in-office transactions.

Many customers opted to use “contactless cards” that don’t have to be swiped or inserted, while mobile and online banking continued to grow faster than brick and mortar transactions at Central Bank, said Paul R. Thornsberry, executive vice president and director of lending for the Lexington-based institution. “I think this (the pandemic) may have accelerated that some,” he said.

Pittsburgh’s PNC Bank, seventh largest in the country, said it developed software that dovetailed with that of the SBA, which teamed with the Treasury Department to administer the loan program. The software must have been vital to PNC, which ranked third in the country when it handled nearly 74,000 paycheck protection loans for about $13 billion.

PNC Bank, which has a substantial presence in Kentucky, handled nearly 2,300 loans in Kentucky for more than $432 million, said John Gohmann, PNC regional president for Lexington.

“Small businesses are the heartbeat of our economy. Many do not have the reserves they need to stay afloat and this grant will provide them the relief they need at this critical moment,” Gohmann said.  “We know Kentucky residents and small businesses are hurting right now.”

Forcht Bank in Lexington expanded its hours and encouraged use of integrated teller machines, which allow customers to interact with a teller on a screen as opposed to one who’s in the bank, according to Mike Noftsger, executive vice president for administration.

Noftsger also said the pandemic prompted his bank to ask some thorny questions about its offices of the future.

“If I’ve got a bunch of desktop computers reaching end of life, do I replace them with desktops or a laptop or some sort of tablet or something similar so that down the road, I’ve got at least the capability of people working remotely?” Noftsger asked.

Traditional Bank, which handled 1,102 PPP loans for a total of $139.5 million, immediately closed its lobbies and shifted in-person service efforts to drive-up banking when the pandemic hit Kentucky, said CEO Andy Baker. The bank also separated its staff to different locations to limit exposure, offered at-risk employees the option to work from home, and allowed branch supervisors to rotate their staffs from week to week to help limit exposure.

The bank used email, its website and social media platforms to help educate customers about safety measures and its online and mobile banking options.

“One of the biggest impacts was losing the day-to-day, direct in-person contact with our customers. We are all about personal relationships and that is harder to maintain over the phone,” Baker said. “However, our team members have found amazing ways to connect with customers in the drive-ups – even from behind a mask.”

While much remained unknown about the virus late in the year, there were at least two certainties about the forgivable PPP loan program that was designed as an economic ventilator for businesses that were flat on their backs because of the virus.

One certainty was that the federal government had paid many of the banks for their work in processing PPP loan applications that were filed no later than the Aug. 8 deadline. Those payments represent an unexpected infusion of revenue for banks that have received – or will receive – billions of dollars for processing loan applications all over the country.

Just over 300 Kentucky lenders handled 50,655 loans for a total of nearly $5.3 billion, according to the SBA, which processed loans totaling $525 billion for more than 5.2 million American businesses.

“It’s helped us from the standpoint of fee generation and we’ve gained some new clients. We did not shut ours (the lending program) down to (existing) customers only. We opened it up to non-customers as well, so we have benefitted with some additional relationships out of that,” said Central Bank’s Thornsberry.

“It is kind of one of those things that was the right thing to do, so I certainly don’t see it as something that would be detrimental to us at the end of the day, but I wouldn’t say at the same time that it was a lucrative endeavor for us,” said Forcht’s Noftsger.

The second certainty is that executives with both big banks and smaller ones in the region believe their institutions played critical roles in processing emergency loans that helped businesses – especially small businesses – survive at a time when they made the decision to shut down or closed because of government mandates.

Those loans helped thousands of businesses in Kentucky maintain their payrolls for thousands of employees who faced financial peril.

“We had tremendous success, I think, being part of the solution,” said Michael Beckwith, who heads the Kentucky division of German American Bank, which is based in Jasper, Ind., and has established a substantial footprint in Kentucky with 17 offices in eight cities since October 2018.

“Those small businesses are what makes everything work. At the end of the day, if they’re closed down and not making payroll …” it hurts the entire community, Forcht’s Noftsger said.

WesBanco made 6,772 PPP loans totaling $837 million in the six states in which it does business, said Jeff Koonce, WesBanco’s market president for all of Kentucky aside from the Louisville market. The bank has 22 branches in Central Kentucky.

WesBanco employees dedicated about 40,000 hours to helping businesses get PPP loans, he said, with teams “who literally worked around the clock during the first round of PPP.”

“I can’t tell you the number of customers that have reached out to say ‘thank you … we would not be here if you had not provided this service and helped us get these loans,’” Koonce said.

WesBanco took action early in the pandemic to protect its clients and employees. The bank immediately limited access at its financial centers to drive-up, ATM and in-lobby by appointment only, he said. Non-financial center employees were encouraged to telecommute, and 90% of non-branch personnel continue to do so (as of September).

Republic Bank helped retain 39,488 jobs in Kentucky through PPP loans, “the most of any bank in the commonwealth, according to the Small Business Administration,” said Steve Trager, chairman of the bank.

“Across all our communities, we are so proud to have been able to help small businesses retain over 62,000 jobs. We did this by securing over $520 million dollars in PPP loans for 3,700 small businesses,” said Trager, whose Louisville-based bank has six locations in Central Kentucky and does business in five states.

Central Bank, headquartered in Lexington, helped some cash-strapped borrowers by approving “modifications” to existing loans while it processed about 9% of the PPP applications that were filed by Kentucky businesses.

“We got out front of that (the PPP program) early on so we were prepared for that,” said Thornsberry, whose
bank made 2,526 loans for more than
$412 million.

Like nearly every bank executive who was interviewed, Thornsberry said processing PPP applications provided a valuable introduction to his bank for many business owners who hadn’t banked there before.

Bank of the Bluegrass & Trust Co.

First State Bank of the Southeast

Manufacturing Makes the World Go ’Round’: In-demand products are made here
Seizing the Opportunity: Logistics firms busier than ever during pandemic