Home » Manufacturing Makes the World Go ’Round’: In-demand products are made here 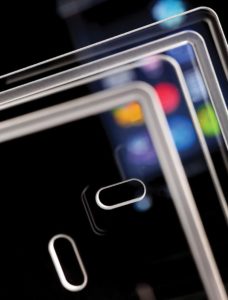 Manufacturing is more than gears, oils and metal, and it’s more than doing something a robot can do, says Lee Lingo, president of the Kentucky Association of Manufacturers (KAM). It’s about using materials in one form and changing them into another form, he said. Creating.

Bourbon is created, and so is energy, he said. And Kentucky is really good at creating.

Take mobile phones, for instance. The screen you touch hundreds of times a day to make it work was probably made in Central Kentucky.

“If you have an iPhone or a high-end Samsung phone, the glass came from (Corning Inc.’s plant in Harrodsburg),” Lingo said. “We create a kind of glass that in many cases doesn’t break and cannot scratch. Who would have even thought of that to start with? That’s a different kind of manufacturing, and it’s pretty special that Kentucky has areas like that we can lay claim to.”

There’s also good chance that your current vehicle, or one you have driven in the past, was created here in the commonwealth. Toyota Motor Manufacturing Kentucky (TMMK) in Georgetown builds the Camry, Avalon and Lexus, the RAV4 Hybrid, and hybrid versions of the Avalon and Camry. Ford Motor Co. in Louisville makes super-duty pickup trucks (F-250 through F-550), the Ford Expedition, Lincoln Navigator, Ford Escape and Lincoln MKC.

“Manufacturing is one of the most important industries that any country, any state, has,” Lingo said. “It pays well, it’s interesting. It makes the world go ’round.”

Advanced manufacturing is key to the Bluegrass region’s economy and is a targeted industry for Lexington’s economic development efforts.

In 2019, more than $3.94 billion in Kentucky manufacturing projects and 5,356 jobs were announced, according to data from the Kentucky Cabinet for Economic Development. More than 70% of all projects announced in 2019 were manufacturing.

In January 2020, TMMK began producing another vehicle: the RAV4 Hybrid. With the addition of the RAV4 Hybrid to its manufacturing mix, TMMK now makes four electrified vehicles, including the Avalon Hybrid, Camry Hybrid and Lexus ES 300h. (It also makes the non-hybrid versions of the Avalon and Camry.)

By 2025, Toyota’s global goal is to offer an electrified option (hybrid, plug-in, fuel cell, battery) on all Toyota and Lexus models. Currently, Toyota sells more alternative powertrain vehicles than the rest of the industry combined, with sales reaching around 13 percent of volume in the U.S.

TMMK is Toyota’s largest plant in the world with more than 9 million s.f. of floor space and more than 8,000 full-time team members, representing a $7-billion investment. The plant can produce 550,000 vehicles and more than 600,000 engines each year.

Though the pandemic required many companies to make changes in their plants, and perhaps rethink their supply chains, manufacturers are still investing in Kentucky. Many Bluegrass region companies also found ways to pivot production to make personal protective equipment (PPE) and hand sanitizer to aid in the fight against COVID-19.

Shortages of face shields, respirators and hoods – all critical to caring for patients with COVID-19 – led to increases in demand for Bullard’s products, reaching as much as 30 times the normal orders. The Toyota Production System Support Center (TSSC) worked with Bullard team members in Cynthiana to apply the well-known Toyota Production System (TPS) to its increase PPE production. TPS is a production system based on the philosophy of achieving the complete elimination of all waste in pursuit of the most efficient methods.

“Considering the urgent need to supply medical gear to caregivers on the front lines of the fight against COVID, we were very eager to share our know-how to help increase output as fast as possible,” said Jamie Bonini, vice president, TSSC.

“I’m proud of our team, not just for changing the way we do things to protect more workers, but for doing it while also putting in strict COVID-19 prevention protocols, including social distancing and mandatory face masks, to ensure their own health and safety,” said Wells Bullard, CEO of Bullard, who is the great-great granddaughter of the founder, Edward Dickinson Bullard.

Bullard is a fifth-generation family-owned enterprise that makes head and face protection, powered air-purifying respirators and supplied air respirators, fire and rescue helmets, and thermal imaging cameras. It was founded in San Francisco in 1898 as a supplier of carbide lamps and other mining equipment. About 20 years later, the company invented the iconic construction hardhat.

From July 2019 to July 2020, 32 manufacturing investment announcements were made in the 13 counties that make up the Central Kentucky region. That’s a bit less than previous years, but still impressive given that the nation is battling the COVID-19 pandemic. The combined $547.1 million investment will create 672 new jobs in the region when total employment is reached.

Here’s a look at some of the manufacturers’ plans.

• Toyota to produce all-wheel drive vehicles – Toyota unveiled plans in early 2020 to produce new all-wheel drive versions of its popular Camry and Avalon sedans, both of which will be manufactured at the Toyota Motor Manufacturing Kentucky plant in Georgetown. According to Toyota, market demand for AWD vehicles has increased significantly but few midsize sedans outside the luxury category have offered the feature. The Camry AWD is available at dealerships now. The Avalon AWD will be for the 2021 model year and will be available for sale this fall.

• Apple invests in Corning, again – In the fall of 2019, Apple awarded $250 million from its Advanced Manufacturing Fund to Corning Inc. in Harrodsburg, the supplier of precision glass for its iPhone, Apple Watch and iPad devices. The award builds on the $200 million the company received in 2017. The combined investment supports Corning’s research and development into state-of-the-art glass processes, equipment and materials integral to the delivery of next-generation consumer devices.

Corning has been part of the Harrodsburg community for 65 years. The plant, which employs 400, is Corning’s longest-running U.S.-based manufacturing facility.

Apple and Corning have been product development partners for more than a decade, and the Harrodsburg facility has played a key role in delivering glass solutions for the iPhone since its inception in 2007, when Gorilla Glass revolutionized the industry. Some of the most important innovations in glass have happened at the Kentucky plant — glass for every generation of iPhone and Apple Watch, and many generations of iPad, have all been made in the Harrodsburg facility. Since iPhone launched in 2007, Apple has spent nearly $3 billion with Corning on the glass used in iPhones, Apple Watches and iPads.

The new facility also will serve as a maintenance, repair and overhaul hub to meet rising demand for aircraft maintenance. The 95,000-s.f. expansion will include new carbon furnaces plus ancillary equipment, as well as upgrades to existing machinery.

The company plans to create 100 new jobs over the next 15 years.

Forklift manufacturer Hyster-Yale Group broke ground in late 2019 on a $25.7 million expansion that will add 160,000 s.f. to its Berea facility. The Cleveland-based company opened its Berea plant in 1973 with annual production of approximately 5,000 trucks. The consolidated Hyster-Yale business has since grown to become an international company that shipped over 100,000 units globally in 2018, and currently employs approximately 7,900 people worldwide.

Some of the manufacturing firms in Central Kentucky include:

Fans and lights for industrial, agricultural, commercial and residential settings

Distiller of bourbons and American whiskeys

More Than a Bakery 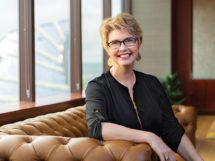 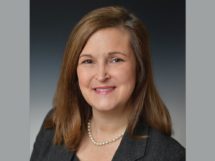 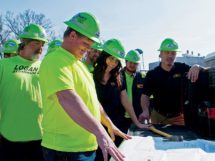