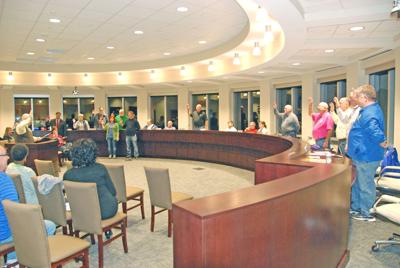 SOMERSET, Ky. — The Somerset-Pulaski Economic Development Authority (SPEDA) presented a new initiative to Somerset City Council Monday night that will use growth to pay for growth.
The council heard the first reading of an ordinance to establish two tax increment financing (TIF) districts within the Somerset city limits. TIF is primarily used to help local governments spur development in declining or underperforming areas. Creating a TIF district does not raise taxes in the designated area; rather, it earmarks future property tax gains from an improved property to pay for the current cost of infrastructure improvements.
Examples of public costs that can be funded through TIF districts include sewers, water supply, storm drainage, street construction, flood control, and utilities.
SPEDA President and CEO Chris Girdler said creating TIF districts is a crucial step in increasing property value in the designated areas and spurring future development.
“Giving developers an incentive to locate here is extremely important and needed to help SPEDA be competitive in recruiting new business and industry in two of the most popular areas of our community,” Girdler said. “We are not raising taxes with this initiative and we are not asking our taxing districts to give up anything they already have or pay for anything they don’t. We’re simply asking them to invest in economic development in these areas by earmarking tax revenues they would receive from an improvement project when its property value increases in the future.”
In fact, Somerset and Pulaski County are late in implementing this economic development tool — these districts should have been created a decade ago, Girdler said. The first pilot TIF projects were introduced in Kentucky nearly 20 years ago. There are currently more than 35 TIF projects in Kentucky representing more than $10 billion in investment.
The proposed TIF districts in Somerset are located downtown and along the U.S. 27 corridor. The footprint for the Downtown Prosperity TIF District includes 81 acres in an area spanning from the intersection of Main and West Mount Vernon streets west to Somerset Cemetery — including the ailing Cundiff Square development where the future University of Somerset is planned — and south along Old Monticello Street to the Continental Refining Company property.
“I do not know if downtown Somerset has seen as much activity and development in the last 50 years as it has in the last year and a half and I believe there is even more to come,” Girdler said. “This particular TIF district is aimed at reenergizing and reinvigorating a blighted area that has significant potential.”
The designated area along U.S. 27, called the Education and Convention Center TIF District, encompasses 124 acres surrounding the Lake Cumberland Regional Airport, Somerset Community College, and The Center for Rural Development, as well as property between Kroger Marketplace and Lowe’s on the other side of the highway.
“This TIF district can be utilized to create a better experience for our students and visitors by offering more dining, shopping, and lodging options,” Girdler said. “When someone attends a conference or convention, they hope to be able to park their vehicle and be within walking distance of many community amenities.”
Girdler said the Education and Convention Center TIF also complements the Transportation Alternatives Program (TAP) grant the city recently received to fund a sidewalk project that will connect downtown to this development area. Together, the two projects will further increase development and improve walkability and pedestrian safety, he said.
Several Kentucky cities with TIF districts have seen significant gains in economic development and increased property value. TIF districts have funded public costs for successful projects in growing cities like Williamstown, Bowling Green, Paducah and Owensboro — including The Ark Encounter, the Paducah Downtown Riverfront Redevelopment Project, SKyPAC (Southern Kentucky Performing Arts Center), the Bowling Green Hot Rods stadium and the Downtown Owensboro Riverfront.
According to the ordinance, in order to qualify as a development area, the property must exhibit at least two of the following conditions:
The city will determine how the captured revenues are used to foster development in the designated areas, the percentage of tax revenues committed, and the length of the tax pledge, Girdler said.
The council will hear the second reading of the TIF ordinance and vote on it on Nov. 9. Upon passage, Girdler said he will present the initiative to Pulaski County Fiscal Court and the Pulaski County Public Library board of directors, asking both entities to pass a resolution agreeing to support TIF and commit a percentage of any increases in property tax value within these districts.
“SPEDA does not want to leave any stone unturned, or any tool in the toolbox unused,” Girdler said. “We are working diligently on many different fronts to promote, grow, and create more ways for our community to thrive. If we are to continue providing options for our citizens, create more good-paying jobs, enhance educational opportunities and accomplish what is SPEDA’s number one goal — improving the overall quality of life — then we must look at options like TIF.”