Home » Amid pandemic, new company to manufacture PPE in Paris

“Personal protective equipment is in high demand throughout the world, and this new company can help meet that need. Also, as a veteran-run company, leaders at U.S. Medical Glove want to create quality, well-paying jobs for other veterans. Congratulations to U.S. Medical Glove for moving forward with its first facility, and thank you for building your business in Kentucky,” Beshear said. 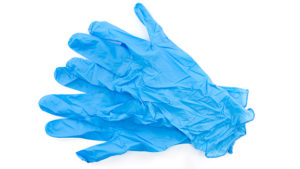 With U.S. Medical Glove established last month, company leaders plan to purchase, retrofit and expand an existing facility in Bourbon County with a nearly $32.5 million investment. They expect the company’s automated manufacturing operation to begin in the first half of 2021, with the production of more than 1 billion Liberty Gloves. The production process will use latex-based nitrile sourced from Zeon Chemicals in Louisville. Company executives plan to employ 45 high-level computer technicians initially with additional staff to follow as the company installs new production lines.

Product packaging also will be American-made, medical-grade paper. The company plans to explore transitioning from oil-based raw materials to plant-based, which would allow U.S. Medical Glove to produce a biodegradable product to ease environmental waste concerns.

“This plant is part of returning critical product manufacturing to the United States,” Davidson said. “Our hiring of veterans is a big part of that. They bring the values and skills they learned in their military service. We describe Liberty Gloves as made for America by Americans.”

In 2020, approximately 100 manufacturing facilities in Kentucky – including many new to the industry – used existing operations to provide personal protective equipment in response to high demand due to the pandemic. The manufacturers produced barriers, masks, gowns, disinfectant, face shields, intubation boxes, ventilator components and hand sanitizer.

Gov. Beshear and Lt. Gov. Jacqueline Coleman announced in September the Department for Public Health warehouse has completed the state’s stockpile and there is enough PPE for a 120-day surge. Gov. Beshear, Lt. Gov. Coleman, First Lady Britainy Beshear and other state leaders toured the warehouse in September to highlight the state’s success in securing necessary PPE for frontline workers in the commonwealth. Many states struggled early in the pandemic to secure enough PPE. Corporate partners have worked with the state to donate or produce the much-needed PPE.

Bourbon County Judge/Executive Michael Williams said the company could have a positive long-term impact on the region.

“Their impact on our community will no doubt be very positive for many years to come. Their plans to begin production next year will quickly establish them as a community partner and start to build their reputation for a positive impact to our workforce for technical, great-paying jobs,” Williams said. So much positive attention to their business is going to be the result as they grow their capacity to produce such a needed product for our entire nation. Their decision to come to Bourbon County’s industrial park and how those connections were made are a positive result of many participants and dedicated efforts to grow our community. We will look forward to them being an inspiration for other businesses who might consider our community for future growth and prosperity.”

The community, the Kentucky Economic Development Finance Authority (KEDFA) last week preliminarily approved a 10-year incentive agreement with the company under the Kentucky Business Investment program. The performance-based agreement can provide up to $2.5 million in tax incentives based on the company’s investment of $32.455 million and annual targets of: