Home » The front door to NKY 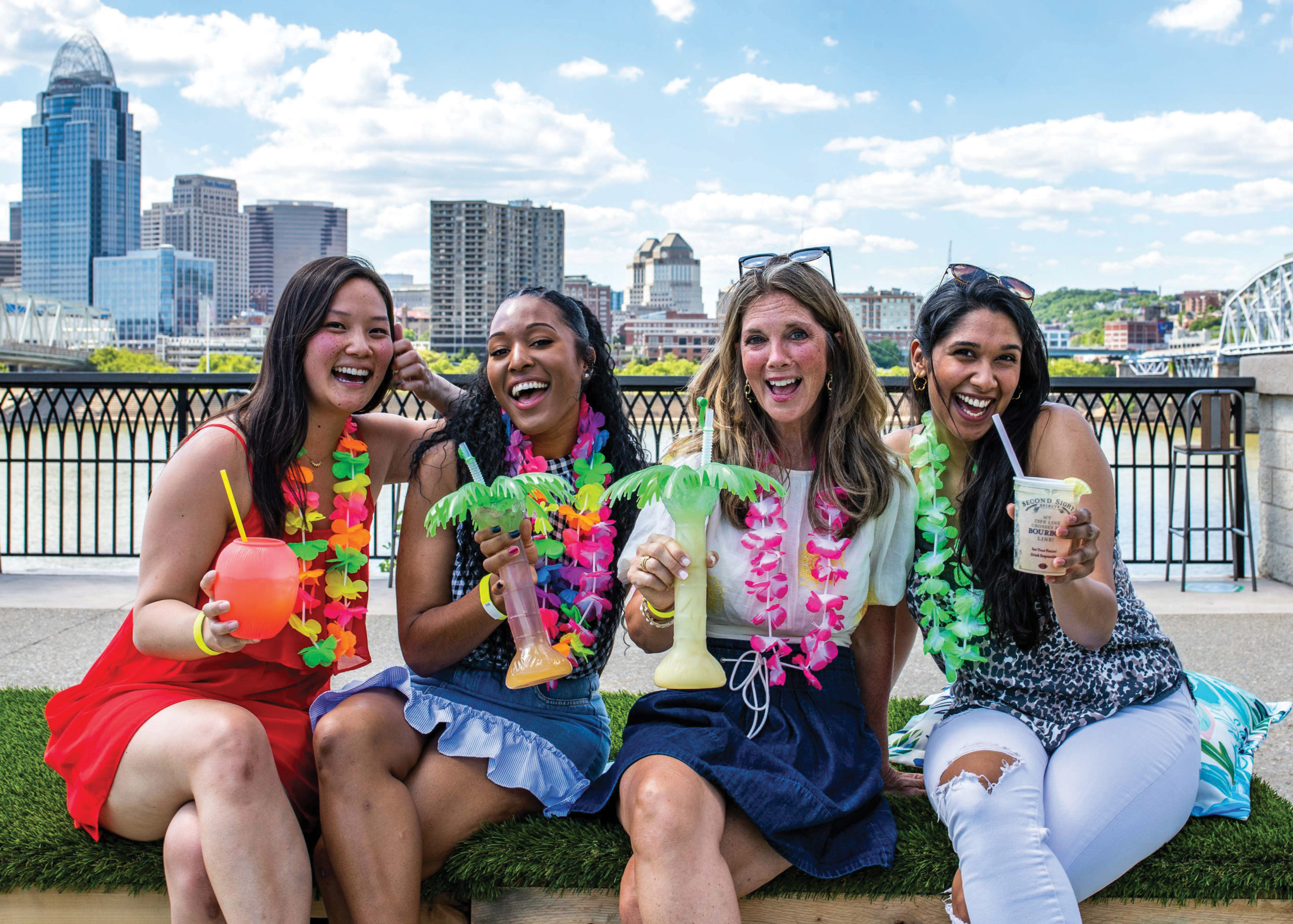 “The urban core is the front door to Northern Kentucky. It sets the stage for welcoming new business and talent to the area,” said Karen Finan, president and CEO of OneNKY Alliance.
“The stronger our core is, the better the whole. You can feel vibrancies in the river cities, especially what’s happening now through housing, retail, business amenities. And that spreads south, so new ideas and new business ventures are implemented,” she added.

Riverside retail and entertainment destination Newport on the Levee is being revitalized by North American Properties (NAP). The multi-level 360,000-s.f. complex, which attracts more than 4.5 million visitors each year, connects Newport to Cincinnati via the popular Purple People Bridge.

Initial construction of the $100 million expansion and renovation project began in July 2019. While construction plans were slowed by the pandemic, NAP created Bridgeview Box Park, a vibrant container park featuring eight local restaurants and retailers along the river.

“Rather than pausing all efforts with the onset of the pandemic, we pivoted to focus on delivering Bridgeview Box Park as a fun and safe place for the community to come out of isolation and gather together again, while still having space to physically distance,” said Tim Perry, managing partner at NAP.

Construction is set to be completed by mid-2021. It is being managed by Turner Construction of Cincinnati.

Riverfront Commons is a project to connect NKY’s river cities with an uninterrupted 11.5-mile walking and bike trail stretching from Fort Thomas to Ludlow. It was proposed in 2006 by Southbank Partners.

In addition to economic development, the project helps with ecosystem restoration and riverside stabilization. When completed, Riverfront Commons will seamlessly connect via the Purple People Bridge to trails in Cincinnati, the Licking River Greenway in Northern Kentucky and Devou Park in Covington.

Portions of the $6.54 million “crown jewel” of Riverfront Commons were nearing completion in late 2020 in Covington. It is a 2.7-mile development next to the John A. Roebling Suspension Bridge that includes a 1,350-seat amphitheater, two concrete paths totaling 2,800 feet, a cobblestone pier for paddlers and anglers, upgraded overlooks, and a redesigned cul-de-sac at the foot of Greenup Street.

The “stage” area of the amphitheater has a unique backdrop: the Cincinnati skyline. Behind the seating is the city’s floodwall, beautifully decorated with murals.

Another transformative riverfront project is taking shape in nearby Newport. Construction began in 2019 – and was nearing completion in late 2020 – of a $40 million music venue that is expected to draw more than 180 events and up to 400,000 guests each year. It is part of Corporex’s $1 billion Ovation project, a mixed-use development that will be comprised of 900 residential units, restaurants, retail, a hotel and offices.

Corporex is moving forward with the next phases of development – a hotel and 100,000-s.f. office building west of the music venue. The hotel and the office building will be built above a 550-car parking garage that is under construction.

In 2020, Corporex completed its renovation of a high-rise office building into a boutique apartment community on the riverfront in Covington. Madison Place has 187 studio, one-bedroom and two-bedroom apartments with views of downtown Cincinnati and the Ohio River. It complements one of Corporex’s other residential developments near the river, The Ascent at Roebling’s Bridge, an icon in Covington with its blue and white windows and sloped, spiral roof.

SkyPoint Luxury Condos also offer an unrivaled view of the Ohio River. The former convalescent home, located on a Newport hilltop, was renovated into 45 residences by developers 120 Main St. LLC. Most of the first-phase units have floor-to-ceiling windows with one-of-a-kind views of the Cincinnati skyline.
Hillside development Veranda on the Views in Covington has 18 high-end, three-story townhomes with unobstructed skyline views. The condos, developed by Joshua One, are an average of 2,500 s.f.

Job growth and economic development in NKY has increased demand for residential real estate of all types, even during the global pandemic.

“The [housing] demand is there from all of these new jobs and from the great jobs that were already available in Northern Kentucky,” said Lee Crume, president and CEO of Northern Kentucky Tri-ED, the region’s economic development company. “Who would have guessed that [increased home sales] would have been one of the outcomes of coronavirus? A market that was doing pretty well already has just gone gangbusters this year.”

A once-in-a-lifetime chance at riverfront development

Covington officials are excited about the chance to restore the street grid, now that the city has purchased the 23-acre downtown site once occupied by the IRS, where federal tax returns were processed for more than 52 years.

The bulk of the property sits just north of Fourth Street between Madison Avenue to the east and Johnson Street to the west, with an adjacent six-acre parking lot west of Johnson reaching the approach to the Clay Wade Bailey Bridge.

As of December, the city was accepting proposals from firms to demolish and salvage the existing buildings. Then the sprawling site will be prepped for development by restoring the street grid, extending utilities and building fiber and Wi-Fi infrastructure.

“Once the infrastructure gets developed, we’ll be able to start selling off parcels and having smaller, more incremental types of development rather than a 30-story office tower that takes up an entire block,” said Tom West, the city’s economic development director.

The site’s master plan includes several goals, including: creating jobs and tax revenue from a variety of workplace environments; including a mixture of uses and outdoor spaces; making a walkable and drivable street grid; enhancing the area’s connection to the Ohio River; and integrating the area with neighborhoods and business centers.

“We’ve made a conscientious decision about this site that we are not going to wall off the river or the view of downtown Cincinnati,” West said. “Our mayor is famous for saying, ‘When you buy Covington, you get Cincinnati for free.’ We do have the best view and we don’t want to just completely create a wall there that blocks people from that view.”

That view attracts visitors and residents alike, Finan said. The riverside communities are alive with vibrancy and innovation, a perfect place to run a family business or a Fortune 500 company.

“Northern Kentucky is an attractive place to live for so many reasons. There has been a significant increase in development along the riverfront, which has brought to life a flourish of entertainment and community-engaging opportunities,” agreed David Spaulding, vice president and general manager of Turner Construction.