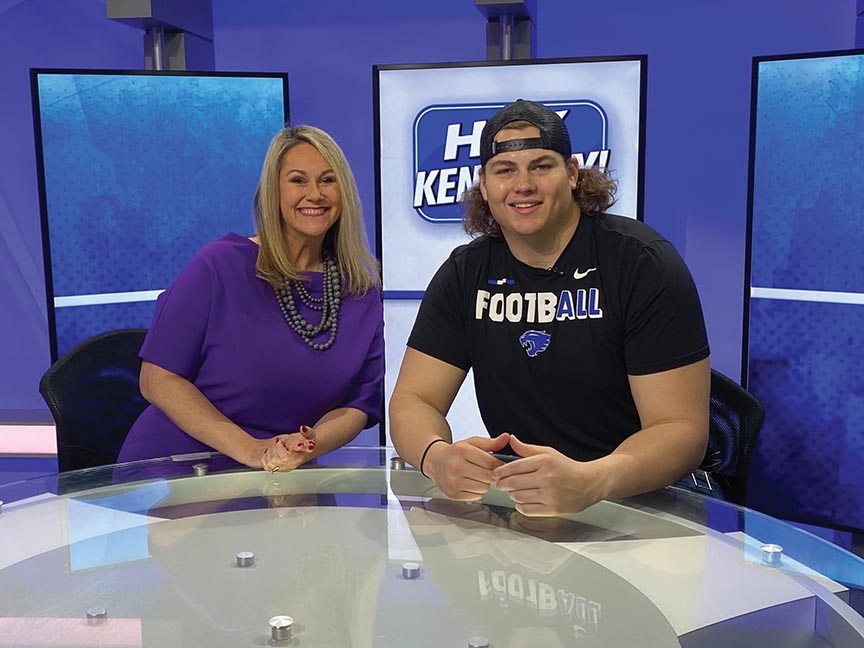 Mary Jo Ford, better known as Mary Jo Perino, covered University of Kentucky sports for LEX-18 in Lexington and was a co-host on Matt Jones’ television program, “Hey Kentucky.” Ford recently stepped away from the spotlight to focus on her role as regional sales leader for Sema4, a health intelligence company based in Stamford, Conn.

(Editor’s note: The March issue of  The Lane Report features our semi-annual list of the Top Women in Business. At lanereport.com, we’re shining the spotlight on one of the honorees each day. Day 9: Mary Jo (Perino) Ford, former sports anchor for WLEX-18.)

Our occasional feature, Top Women in Business, highlights some of the women in and around Kentucky who are making an impact in business, the professions, politics and economic development. The intent is to recognize not the household names, but those in key roles whose work ethic and body of work are making important contributions to commerce—and life—in the area.

Our Top Women in TV profile features a handful of dynamic women who have made a name for themselves reporting on Kentucky sports, weather and news.

Mary Jo Ford, better known as Mary Jo Perino, covered University of Kentucky sports for LEX-18 in Lexington and was a co-host on Matt Jones’ television program, “Hey Kentucky.” Ford recently stepped away from the spotlight to focus on her role as regional sales leader for Sema4, a health intelligence company based in Stamford, Conn.

Title/company: Regional sales leader for Sema4, a laboratory specializing in women’s health and genetics. We do prenatal testing, carrier screening and hereditary cancer testing. I work with OB/GYN offices in the entire state of Kentucky.

Education/training: Bachelor’s degree in broadcast journalism, 1999, University of Missouri. Top accomplishment: Being named Kentucky Sportscaster of the Year in 2009 and 2010.

The person who most influenced me: My dad. He never doubted me and always made sure I had every opportunity to chase my dreams. And he taught me to work hard.

My biggest challenge and how I overcame it: Starting out in the [television] business when women weren’t given quite as many opportunities in sports was difficult, but everywhere I did get lucky enough to end up was very supportive.

My advice to younger women in business: Do your research. Read everything you can. And don’t change who you are.

The best/worst part about being on television: The worst part is easy—the hours and the pay! But to be able to tell stories and connect with people is an incredible feeling.

When I was a child, I wanted to be: Exactly what I ended up being! I knew at 3 years old this was what I wanted to do.

Something I love doing: I love cooking and entertaining, singing bad karaoke and laying on a beach. Anywhere in the sun with a good book and a piña colada.

I’m inspired/driven by: The haters!

One important skill everyone should have: Listening.

The most important personal attribute I bring to my job: I think I never tried to be anyone else but myself, take it or leave it.

A song from my childhood/ teenage years that I still rock out to when no one else is around: Anything from the ‘80s or ‘90s. That’s my jam.

If I had to delete all but three apps from my phone, I would keep: Facebook, Instagram and Twitter. I know it’s so lame and ridiculous but I am held captive by social media! My husband would delete those three apps from my phone in a heartbeat. When my screen time numbers pop up I’m always a little ashamed (OK … a lot ashamed) of how much time I spend scrolling.

In the next five to 10 years in my job, I hope to accomplish: For now I’m taking a break from TV. I work for a diagnostic laboratory selling genetic testing. It has been really rewarding to find success in another industry, and have more time with my husband, Jon, and my kids Sam, 15, and Vivian, 5.