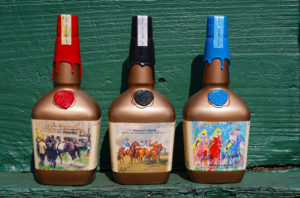 LEXINGTON, Ky. — Hall of Fame jockey Isaac Burns Murphy accomplished a level of success in the late1800s that, by many measures, has never been equaled. So, it is only fitting that an effort to celebrate his remarkable legacy is, itself, also unique.

This year, the annual release of a commemorative Maker’s Mark® Bourbon bottle in partnership with Keeneland will, for the first time, be three distinct bottles, each with its own label featuring the work of artists Sandra Oppegard, Andre Pater, or Tyler Robertson. The labels depict the pageantry, beauty, and power of Thoroughbred racing, a sport on which Isaac Murphy certainly left an indelible mark.

Murphy is the only jockey to have won the Kentucky Derby, Kentucky Oaks, and Clark Handicap in the same year (1884). He won the Derby three times and was in the first group of jockeys inducted into the National Museum of Racing’s Hall of Fame. He was originally buried in the African Cemetery #2 in Lexington but was later moved to the Kentucky Horse Park where he now lies near the legendary Thoroughbred, Man o’ War.

Proceeds from the bottle sales will go to LexArts, greater Lexington’s premier cultural development, advocacy, and fundraising organization, to support its initiatives at the Isaac Murphy Memorial Art Garden in Lexington. The Art Garden is the first park in the U.S. to honor African American jockeys, who were the earliest Black professional athletes. Funds from the 2021 bottle series will provide the remaining funding required to realize a permanent art installation by Lexington folk artist LaVon Van Williams, Jr. as well as future programming within the park with an emphasis on the arts.

The bottles are all pre-signed by the artist who created each label along with Keeneland President and CEO Shannon Arvin, Maker’s Mark Managing Director Rob Samuels, and one of three active Hall of Fame jockeys who has won the Grade 1 Maker’s Mark Mile at Keeneland multiple times: Javier Castellano, Edgar Prado, and John Velazquez.

The three bottles will go on sale Friday, April 2. This begins a three-year series benefiting LexArts initiatives, with the same three artists creating new labels each year for the commemorative release.