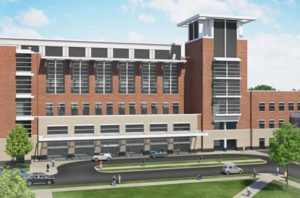 LEXINGTON, Ky.  — UK HealthCare will begin the programming and design of a new outpatient cancer treatment center and advanced ambulatory complex that also will include other ambulatory services. The design phase of the capital project was approved by the University of Kentucky Board of Trustees’ health care committee on Monday and pending approval by the full Board on Tuesday.

The new complex — with an estimated 320,000 s.f. for cancer services — may include multiple buildings but will primarily allow for the needed expansion of patient care services and increased ease of access for the UK Markey Cancer Center. As the only National Cancer Institute (NCI)-designated center in Kentucky, Markey is able to offer cutting-edge and early phase therapies not available to patients being treated anywhere else in Kentucky.

“It is imperative that we strategically expand services and grow in the areas Kentuckians need us most,” said Dr. Mark Newman, UK executive vice president for health affairs. “Kentucky continues to rank first in the nation for deaths from cancer and with the number of patients at UK Markey Cancer Center more than doubling in the past decade, there is no place where the need is greater.”

The proposed complex includes space for other advanced ambulatory (outpatient) clinics and structured parking as well as space for services such as outpatient operating rooms, procedures rooms, diagnostics and imaging services, pharmacy and lab services, and room for meetings and support services.

“It is our longstanding mission to reduce cancer incidence and deaths in the Commonwealth and it is imperative that we keep moving forward to offer the highest quality and most accessible care,” said Dr. Mark Evers, director of the UK Markey Cancer Center. “This new complex is vital for our multidisciplinary cancer team in diagnosing and treating our current and future patients and in our efforts to meet NCI standards in cancer prevention, clinical services, and research to receive designation as a ‘Comprehensive Care Center.’”

Further details on the complex and ambulatory and surgical services being offered as well as other project elements will be determined during this design and programming phase and will be announced later this year. The project will return to the Board of Trustees for approval to move forward with the next step which will be the bidding and construction phases.