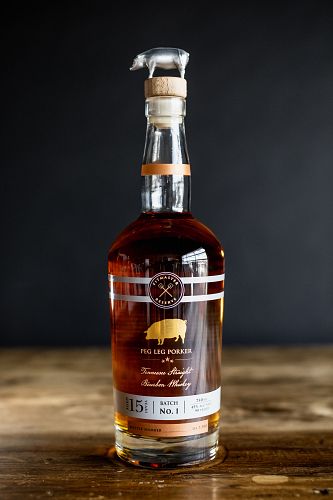 Peg Leg Porker Bourbon is the signature bourbon from Award-Winning Pitmaster, Carey Bringle. Having a deep love for bourbon and appreciation for the fact that bourbon and BBQ pair together so well, Carey Bringle is the first Pitmaster in the US to start his own bourbon brand. Peg Leg Bourbon was also awarded Gold, Double-Gold, and Platinum medals at the San Francisco World Spirits Competition.

Only 136 six-pack cases were released and they quickly sold out. This expression will be released in allocation on a yearly basis as long as supply is available.

Pitmaster Reserve is a 15-year-old Tennessee Straight Bourbon that the non-distiller producer finished through hickory charcoal to help provide its signature smokiness. The much-awaited Peg Leg 15 year is an extremely limited release 90 Proof Bourbon made with a Mashbill of 84% corn, 8% rye, and 8% barley. It comes in a satin-lined wooden box (and a peg leg stopper, too!) which is super fun and classy.

Lovely copper-penny color in the glass, the first sip is surprisingly sharp for a 90-proof whiskey, with a taste of toffee and an almost tannic sweet-tea note. That intense entry fades into a long, complex finish with elements of nuttiness and a lingering backbone of wood and char, either from the long nap in oak barrels or the short kiss of hickory charcoal. The wood character is not overwhelming or unpleasant.