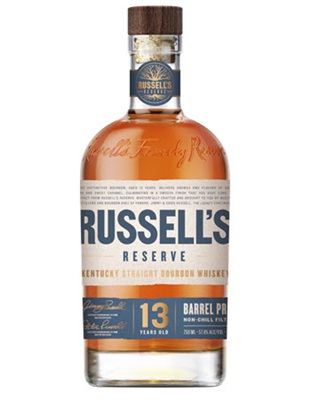 Assessing each whiskey by color, nose, palate, finish, and uniqueness of a product in its category, Minnick ultimately selected the No. 1 whiskey of the year – Russell’s Reserve 13 Year Bourbon.

“During my blind tasting, Russell’s Reserve 13 Year Bourbon showed power and elegance in a single glass,” said Fred Minnick, co-founder of the American Spirits Council of Tasters and world-renowned Bourbon curator, taster and Wall Street Journal-bestselling author,. “It is layered with so many flavors that I would love to sip this every day for the rest of my life. Of course, given the greatness of the Wild Turkey Distillery as of late, I am not surprised the Russell family and their team made this. It’s a once in a lifetime bourbon.”

Straight out of the Commonwealth of Kentucky, Russell’s Reserve 13 Year Old is one of the boldest smoothest bourbons the iconic distillery has ever released. Honoring the family ties that bind, Eddie Russell introduced the new Russell’s Reserve 13 Year Old in June 2021, releasing a 114.8-proof Kentucky Straight Bourbon that exemplifies the Russell family’s mastery of bourbon-making.

In the ultimate distilling challenge, Eddie aged this one-of-a-kind release for at least 13 years, maintained the barrel proof and opted not to chill filter the whiskey, creating a more robust mouthfeel and authentic bourbon experience.

Kentucky bourbons to try in 2023