FRANKFORT, Ky. — Kentucky Governor Andy Beshear and Ohio Governor Mike DeWine announced that they have jointly submitted an application requesting nearly $2 billion in federal funding to make much-needed improvements to the Brent Spence Bridge Corridor that runs through Northern Kentucky and the City of Cincinnati.

Kentucky and Ohio are seeking $1.66 billion in federal grant funding through the Multimodal Projects Discretionary Grant. The grant request represents approximately 60 percent of the remaining $2.77 billion project cost. Each state will also allocate significant state and other federal dollars toward the project. The states will split the cost of the new bridge 50/50, and each state will be responsible for the needed work on its side of the border.

The Kentucky Transportation Cabinet (KYTC) and the Ohio Department of Transportation (ODOT) recently announced that engineering work on the project will move forward as the federal government considers the application. KYTC and ODOT will also continue to work on acquiring property needed to construct the project and will begin meeting with companies interested in working on this historic bridge project.

The Brent Spence Bridge Corridor project will construct a critical companion bridge next to the existing Brent Spence Bridge to improve traffic flow and safety. Improvements will also be made to the interstate network on either side of the bridges throughout an eight-mile corridor from Dixie Highway in Kentucky to the Western Hills Viaduct interchange in Ohio. 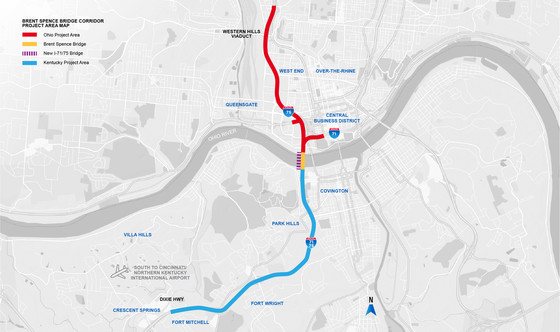 Brent Spence Bridge Corridor Fact SheetThe Brent Spence Bridge, which carries Interstates 71 and 75 over the Ohio River, is currently accommodating more than 160,000 vehicles per day, twice the capacity it was designed to safely accommodate when it opened in 1963. The bridge also carries nearly 43 million tons of goods by truck annually.

This additional capacity that will be created through the Brent Spence Bridge Corridor Project will alleviate congestion, improve safety and open up this nationally significant freight corridor, which carries an estimated 3 percent of the nation’s gross domestic product annually.