LOUISVILLE, Ky. (Dec. 30, 2013) — Louisville Metro Councilman Dan Johnson (D-21) is calling for a review of the Yum Center lease agreement and management opportunities following the release of a report by Standard & Poor which has rated $340 million in arena bonds as “BB,” which is considered junk status. 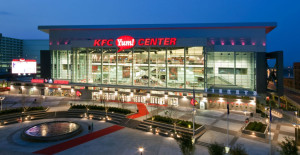 “This report is disturbing and gives the impression that the arena could default because it may be unable to pay bond debt,” Johnson said. “Now is the time to review all aspects of the arena’s operation including the lease with the University of Louisville.”

The S&P report said the status of the bonds could improve if there is a guarantee of more revenue under the recently revised TIF. Over the summer, the TIF was restructured from six to two square miles of area surrounding the YUM Center. The new report indicates there is concern for the arena bonds for the next five years.

Now is the time for change, the councilman said.

“It is time to be realistic and not hide from the financial concerns the arena has caused,” Johnson added. “We owe it to the taxpayers who have just begun paying the maximum amount of the Metro Government share of the bond debt at $9.8 million a year.”