Considered one of the busiest parts of parkway

SALYERSVILLE, Ky. (March 12, 2015) — Crews are starting work in a second section of the Mountain Parkway Expansion. The latest project will widen 1.1 miles of the parkway and make improvements to the KY 7/Salyersville interchange. 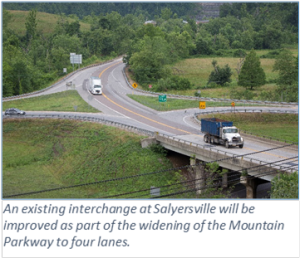 The interchange improvements include reconfiguring the westbound exit ramp to KY 7 from the Mountain Parkway and re-aligning the three other ramps at the interchange.

Greer Mining Inc. was awarded a $22.2 million contract for the project late last year by the Kentucky Transportation Cabinet. Greer crews have placed road construction signs along the parkway and are beginning to clear trees and vegetation in the project area. Affected utilities also are being relocated.

Limited impacts to traffic are expected at the start of this project.

“This is an important stretch of the Mountain Parkway,” said Marshall Carrier, a KYTC engineer who is project manager for the Mountain Parkway Expansion. “It is one of the busiest parts of the parkway. As we make improvements in this area, travelers will begin to see the dramatic difference this project will make for residents, travelers and businesses in Eastern Kentucky.”

The construction phase of the Mountain Parkway Expansion began in January, when crews with Bizzack Construction LLC began work to widen 1.4 miles of the parkway and create an interchange at Gifford Road. Site work and blasting is continuing in the Gifford Road area.

The two projects are among three slated to begin this year to the west of Salyersville in the Magoffin County Central Section of the Mountain Parkway Expansion. A project to improve the KY 30 interchange (Exit 72) and widen the parkway in that area is scheduled to begin later this year.

Combined, the three projects will widen about 6 miles of the parkway to the west of Salyersville.