When you drive in for the first time, Jeptha Creed seems a bit of an anomaly. Commanding the parking lot, a beautifully restored 1932 Ford truck with a load of bourbon barrels in its bed sports the new craft distillery’s name. Atop a hill behind it towers a gorgeous, freshly built, 1,760-s.f. clubhouse, rife with iconic timber framing and wide windows overlooking lush Shelby County farmland. Turns out that numerous nods to old-fashioned ways – more classic farm equipment and vehicles, including a 1915 Ford Model T – are scattered around the property. A 1975 International grain truck actually hauls corn for the spirits’ base from the field to the grain bin. Here tradition is a byword.

“Our core values include respecting our elders and family history and honoring the sacrifices that have been made to allow us the independence and liberties we now enjoy,” explains Autumn Nethery, marketing manager of the business that she helped start in November of 2016. “Our family motto is ‘Don’t forget where you come from.’”

To date, it’s the only distillery owned by two women entrepreneurs. The other is Autumn’s mom, Joyce, Jeptha Creed CEO and master distiller, who brings to the position two degrees in chemical engineering from the University of Louisville Speed Scientific School and 15 years’ experience as a process engineer in an industrial-scale distillation facility. Autumn herself spent a school year in Edinburgh, Scotland, studying brewing and distilling at Heriot-Watt University to prepare for the job.

Both Netherys are high energy and obviously passionate about the distilling process and about the impressive company they’ve created.

“When we decided to start a craft distillery as a legacy for our children, we realized the only way to make it happen was to roll up our sleeves and do it ourselves,” says Joyce, whose husband is a dairy farmer.

Owned by Netherys for more than 250 years, the family farm consists of several parcels that altogether total 1,000 acres. While the distillery is on 64 acres, the main farm residence property is home to historic Jeptha Knob, where Squire Boone and his brother Daniel found superb hunting before Kentucky became a state. They left behind a survey stone with their initials carved on it. The knob lies almost exactly midway between Louisville and Lexington.

One of many unusual things about Jeptha Creed is the fact that it’s a craft farm distillery. Simply put, that means instead of extracts and artificial flavorings, the Netherys choose to use real produce to make their spirits, most of which the family grows itself. Autumn explains that with a goal of creating a higher flavor profile, they often use harder-to-find and harder-to-grow varieties. For instance, the distillery is the only one using Bloody Butcher corn, a heritage variety in use since 1845. Its kernels are a shocking dark red.

On this farm sustainability is important, and leftover distiller’s solids become pig food and fertilizer. Due to the proximity of the distillery to their farmland, the family can easily experiment with ingredients such as agave, peppers and peaches just by stepping outside to pick something fresh and new.

As for Jeptha Creed’s spirits…“We began aging our bourbon in October of 2016,” says Joyce. “It was the first bourbon barreled in Shelby County since Prohibition. We plan to age it for a minimum of two years. We’ll have straight bourbon coming out in 2019 and will hold some back a bit longer for reserves.”

If you just can’t wait, there’s a limited edition of bourbon made as a trial run in 2014, Bloody Butcher’s Creed, available now.

In the meantime Jeptha Creed features vodka (Original, Honey, Apple and Blueberry). The original, says Autumn, is “so smooth, George Clooney could take lessons.” And moonshine – Original, Apple Pie, Blackberry or Louisville Lemonade, which can be consumed straight or mixed with tea for a fine time in the ol’ porch rocker! Those yummy flavors of fruit and the honey originate fresh-picked and fresh-gathered from the farm. All are Kentucky Proud products that are distributed throughout the state. (All military customers receive a discount.)

Tours of the distillery highlight “everything from the ground to the glass.” There’s a short video and an explanation of the distilling process, which is computerized to provide consistency in quality and to “make old-fashioned new,” followed by a gander at three handsome copper stills. Tastings come next, and Creed cocktails are available, including warm-weather slushies in yummy flavors. Tours can accommodate up to 50 people.

Recurring events at Jeptha Creed include a Friday night concert series, Jammin’ at Jeptha, on the patio with live music, a food truck and a bar. You can try your skill at cornhole and checkers while you sip and listen. Josh Bogard and the Dirty South will liven the patio on September 29. The distillery’s bartenders also teach monthly Creed Cocktails Classes – including one on September 28.

The property is rentable for outside events. With an enormous fireplace for chilly fall nights, the clubhouse can seat 110 people indoors for an event. After business hours, the 880-s.f. bar can be rented, as can a 5,000-s.f. outdoor patio with seating for 250, nearly 2,000 s.f. of which is covered. Removable natural gas heaters are also available. 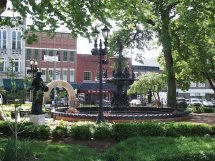