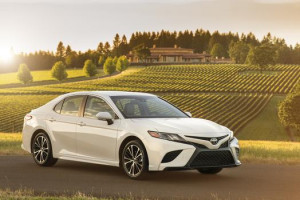 Toyota’s total vehicle production in North America since 1986 has reached nearly 32 million. Key drivers of this year’s production include low fuel prices, continued stability in the overall economy and strong customer demand for trucks and SUVs.

“Every part and every vehicle that rolls off the line reflects our commitment to safety, quality, value, and, above all, our passion for exceeding customer expectations,” said Jim Lentz, CEO of Toyota Motor North America (TMNA). “Our ongoing success is due to the hard work and dedication of team members at our 14 manufacturing plants in North America.”

Milestones in 2017 include Toyota Motor Manufacturing, Mississippi, which celebrated its 10th anniversary of production with the line-off of the one millionth Corolla.

Earlier this year, Toyota announced a $1.33 billion investment at Toyota Motor Manufacturing, Kentucky (TMMK) for Toyota New Global Architecture (TNGA) improvements and other makeovers that will modernize and streamline the production process.

Toyota also made a $373.8 million investment in five U.S. manufacturing plants that will support production of its first American-made hybrid powertrain and to implement TNGA at its Toyota Motor Manufacturing, Alabama, (TMMAL) plant. The investments include: