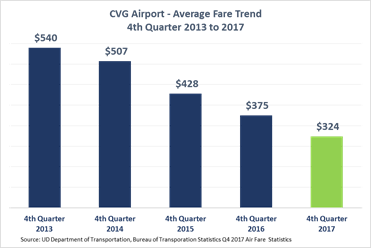 COVINGTON, Ky. (April 17, 2018) — The Cincinnati/Northern Kentucky International Airport (CVG) is once again the lowest fare airport in the region, according to the U.S. Department of Transportation’s average airfare ranking report for fourth quarter 2017.

Below is a summary of the results related to CVG:

• CVG passengers are paying on average $215 less per ticket than four years ago.

2018 session helped get Kentucky’s fiscal house in order, Ky. Chamber says on KET
Ex-Louisville mayor to serve as executive in residence at Spalding