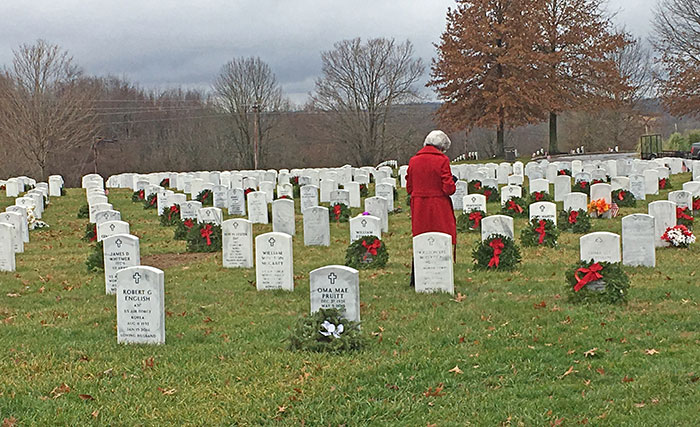 Benjamin Adams, Kentucky Department of Veterans Affairs Commissioner, was the keynote speaker and told of his experience a few years ago when he happened to visit Arlington National Cemetery on Wreaths Across America Day. This was his first introduction to the program.

Also speaking was U.S. Rep. Andy Barr, who highlighted the recognition of Camp Nelson Civil War Heritage Park (adjacent to the cemetery) as a National Monument, and its importance as a key emancipation site and refugee camp for African American soldiers and their families during the Civil War. It was one of the largest Union Army recruitment and training centers in the nation for African American soldiers, then known as U.S. Colored Troops.

The third speaker was Lexington’s own Ret. Corp. Matthew Bradford, USMC, who spoke to this year’s WAA theme “Be Their Witness.” He gave a moving speech about his work with veterans who face challenges both physical and mental after their service to our country. Bradford, who lost both legs and his vision when he stepped on an Improvised Explosive Device (IED) in Iraq in 2006, now has as his personal motto, “No legs, no vision, no problem,” and can speak to service members and veterans from a very personal perspective.

Wreaths Across America was founded so that the courage and sacrifice of our military veterans would never be forgotten. Saturday, Dec. 15 was National Wreaths Across America Day all across the country, when citizens came together to remember our fallen, honor those who serve, and teach younger generations the value of freedom. Those who attended helped lay remembrance wreaths on the headstones of our hometown heroes and recognize their service to our nation. As each wreath was placed, the name of that military veteran was spoken aloud, to remember each one and show support for their families.

The event at Camp Nelson was one of more than 1,500 WAA ceremonies at cemeteries across the country, each one starting at exactly the same time.

This annual public family-friendly event seeks to further the WAA mission of Remember, Honor, Teach, ensuring that the memory of those who served our country endures. Next year, WAA Day will be Saturday, Dec. 14, 2019.

All wreaths come from donations through the Wreaths Across America website. Further donations may be made at any time and will go toward next year’s ceremony.