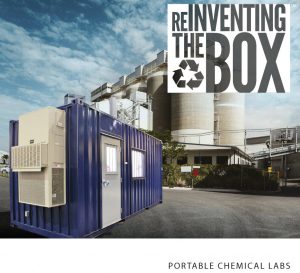 DropBox recently received the contract through the DHS’ Countering Weapons of Mass Destruction Office to assemble two On-Dock Rail Straddle Carrier Portal (ODRSCP) units. Those will be installed at Maher Terminals in Elizabeth, N.J. to scan incoming shipping containers for dirty bombs or other potential weapons of mass destruction. Company leaders anticipate additional contracts could be awarded in the future to outfit ports throughout the US with the new technology.

As part of the project, company leaders invested approximately $3 million to buy its facility in Wurtland, which it previously leased since 2016. DropBox also will purchase new equipment to fulfill the project requirements.

“We congratulate DropBox, Inc. on this significant DHS contract award, and we thank the company for its commitment to the commonwealth in acquiring its facility in Wurtland,” Gov. Bevin said. “Not only will this project create quality jobs in Northeast Kentucky, it will play a key role in keeping Americans safe at our international ports of entry. We are proud that a Kentucky company is supporting this vitally important effort, even as we further solidify our reputation as the nation’s center for engineering and manufacturing excellence.”

The contract has been nearly a decade in the making and comes in response to 2010 data that indicated only 5 percent of all overseas shipping containers entering the US were scanned for radioactive material. Currently, inspection of incoming containers is labor intensive and can cause significant delays at high-traffic ports. The current system requires containers to be targeted individually for inspection and scanned manually with wands.

DropBox’s ODRSCP units will streamline the process by allowing both the straddle carrier and shipping container to pass through the unit’s high-tech, automated scanner tunnel on their way to their designated railroad car or truck.

“Sen. Paul and Gov. Bevin are to be commended for their vision for Kentucky,” said Robert Slagel, president and CEO of Portable Solutions Group, parent company of DropBox. “On behalf of our nearly 130 dedicated employees, we are honored to do our part to help validate the governor’s bold vision to make the commonwealth the engineering and manufacturing hub of excellence in the world.”

The Savannah River National Laboratory in Aiken, S.C. in 2010 selected DropBox to build a prototype ODRSCP unit. That prototype underwent further testing in Norfolk, Va. before it was returned to the company for minor modifications, refurbishment and additional testing. The unit currently operates at the Port of Tacoma in Washington.

Sen. Robin Webb, of Grayson, said the company has a positive impact on the local workforce.

“We are pleased DropBox Inc. chose to locate this project in Wurtland because this operation provides a welcome boost to the economic base industry in Greenup County,” Sen. Webb said. “We look forward to a long and prosperous partnership.”

Rep. Danny Bentley, of Russell, said he hopes this project is the beginning of further growth in the years ahead.

“This is great news for our community. I am very pleased to see these jobs come to Wurtland and commend DropBox, Inc. for investing in the hardworking men and women of Greenup County,” Rep. Bentley said. “The technology used here will help keep our nation safe and I am hopeful the 20-30 jobs created now will indeed multiply as the use of these containers grows.”

Tim Gibbs, president and CEO of Ashland Alliance, said the company is a leader among Kentucky businesses.

“Portable Solutions Group and Rob Slagel have placed Wurtland, Ky. on the cutting edge of manufacturing and technology for the United States and the world,” Gibbs said.” “It is companies like this that will continue to lead the way for the commonwealth.”

A detailed community profile for Greenup County can be viewed here.