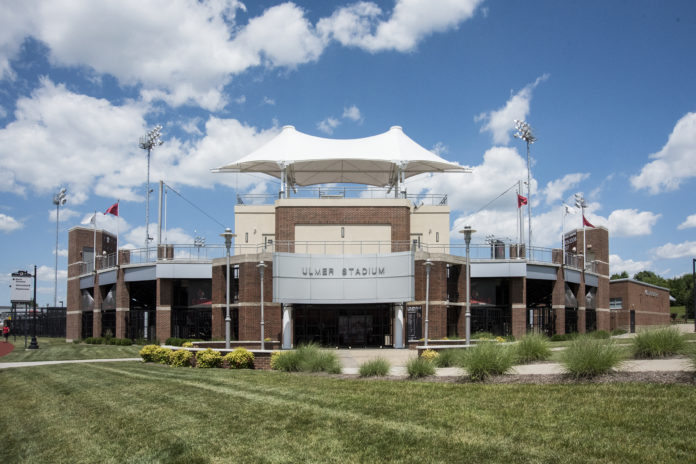 A renaming ceremony took place just prior to the game against Kentucky on April 17.

“Don Dobina was a pioneer for women’s softball throughout the state of Kentucky and his support of the University of Louisville’s program is immeasurable,” said Vice President for Intercollegiate Athletics/Director of Athletics Vince Tyra. “Don and his wife, Susan, have been long time supporters of our softball program and we are proud to honor Don’s legacy as part of our own legacy by naming the field after him tonight.”

Dobina, who died in 2016, was an avid supporter of the University of Louisville softball program and an advocate of the sport throughout the Commonwealth of Kentucky for nearly 30 years.

As founder and president of the Louisville Lady Sluggers Softball Club, Dobina was instrumental in the growth and development of fastpitch softball locally. Under his direction, the Louisville Lady Sluggers traveled throughout the country and won several national championships. He was well-respected within the softball community, earning National Coach of the Year honors in 2006.

Through the Louisville Lady Sluggers Club, Dobina made it possible for hundreds of girls to have the opportunity to earn scholarships and play for more than 70 universities throughout the country – including several UofL alumnae and current players. His daughter, Shae, is a Louisville softball alum.

In 2010, the University of Louisville honored his efforts and impact by bestowing him with the inaugural Spirit of Softball Award. In 2013, Dobina, the president and CEO of MPC Promotions, was the lead donor in the expansion of Ulmer Stadium.

The Canton, Ohio, native’s connection with the University of Louisville runs deep as Dobina was a football letterwinner for the Cardinals under Coach Lee Corso in 1974. A lifelong athlete, he played semi-pro baseball with the Cleveland Indians, was a gold medalist in volleyball at the Bluegrass Games and served as president of the Louisville Swim Association.

In recognition of their gift, UofL’s campus venue Cardinal Arena has been renamed L&N Federal Credit Union Arena. Opened in 1991 and renovated in 2017, the 1,100-seat facility is located at the corner of Floyd Street and Brandeis Avenue and is connected to the northeast corner of the Swain Student Activities Center. It houses the offices, training and competition facilities for the Cardinals’ women’s volleyball team.

The gift will go toward the Cardinals’ “Next Step Fund,” which will provide resources for future improvements with UofL’s student-athlete experience and capital projects.

“We are incredibly appreciative of L&N Federal Credit Union’s support, along with Chris Brown and his team’s personal support and involvement with fostering the mission of creating a terrific student-athlete experience at UofL,” Tyra said. “Their mission and values closely align with ours and their ongoing financial support is a sure sign of their belief that we are on the right track.”