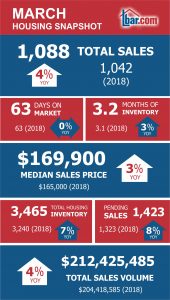 LEXINGTON, Ky. — Central Kentucky region’s real estate market continues to flourish. Many of the major economic indicators point to this continuing through the remainder of the year – a powerful combination of low mortgage rates, increasing inventory, rising incomes and higher consumer confidence. This has translated into increased local activity in the market, even as national home sales slowed.

Home sales rose in March by 4 percent, hitting 1,088 total transactions in 2019 versus 1,042 in March 2018. Coupled with a strong February, the first quarter of 2019 ended up 4 percent as well, reaching 2,628 total home sales. Nationally, homes sales were down over 5 percent in March from a year ago.

Demand for housing in the area, as in many places across the country, has outpaced supply for several years. Although that is still happening locally, the lack of inventory issues that have plagued buyers for so long are starting to fade. Over the past several months, the total number of homes on the market has increased year-over-year, giving buyers more options when they start their search.

Lexington-Bluegrass Association of Realtors President Al Blevins says that continued inventory increases coupled with a bump in new listings is a good sign for real estate in the bluegrass region. He continued, “Buyers have been limited in selection for some time now and this new trend opens up choices for those looking to purchase as well as bringing discouraged buyers back into the market.”

Even with a historically steady price increase, residents in the area enjoy housing affordability rates not seen in many parts of the country. With the national median home price reaching north of $250,000, the local region offers residents good value and the chance to build equity if they decide to purchase a property. 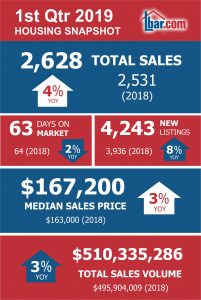 Blevins noted that with interest rates still at historically low levels, the real estate market should continue to be extremely strong throughout the Central Kentucky area.

Showing signs of strength, pending sales in March were up 8 percent year over year and up over 32 percent from February. The inventory of homes for sale jumped 3 percent in March from a year prior, reaching a 3.2-month supply.

“Buyers will enjoy a more favorable market for the next several months as more and more listings should become available,” Blevins said. “The spring months, typically the second quarter is when most people list their homes for sale.”

In fact, research from realtor.com shows that April and May are two of the best months to put a home on the market, giving sellers more property views, better exposure and ultimately selling faster than other times of the year.