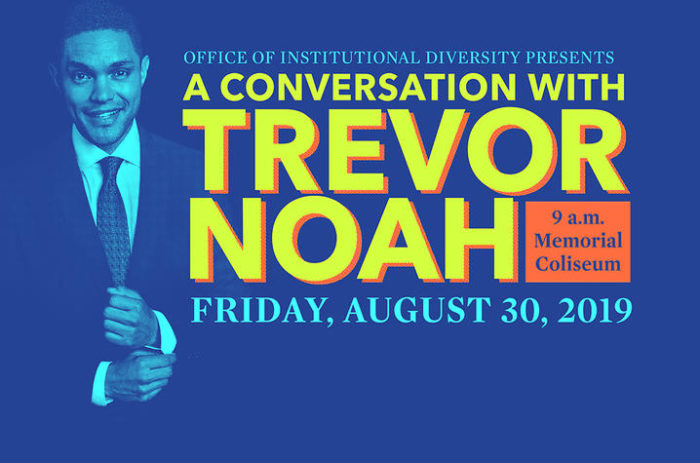 LEXINGTON, Ky. — Seventy years ago this fall, Lyman T. Johnson enrolled as a student at the University of Kentucky. Johnson’s courage and leadership up to that moment resulted in the first racially integrated class at UK. Commemorating Johnson’s significant first steps and the examples set by many students, faculty and staff who followed him, the university will host a series of events throughout the 2019-20 academic year that commemorate UK’s 70 years of integration.

This year of commemoration will begin with an assembly at 9 a.m. Aug. 30, featuring remarks from Trevor Noah, host of “The Daily Show” on Comedy Central. In addition to being an accomplished comedian and television personality, Noah is also the author of “Born A Crime,” a nationally acclaimed autobiography focused on his childhood growing up in apartheid South Africa. This assembly will draw on Noah’s reflections of his life from South Africa to the United States, sharing thoughts on the importance of diversity and social justice dialogues. In addition to Trevor Noah, the assembly will also feature remarks from UK representatives and the granting of an honorary doctorate to UK alumna Doris Wilkinson.

UK faculty and teaching staff are encouraged to highlight this opening assembly as part of their syllabi planning and class discussions in the fall. Faculty may allow their students to engage with the assembly in several ways:

• Including attendance at the Aug. 30 morning assembly as your class session if you are teaching at this time, or including it as an excused absence (assembly start time of 9 a.m. in Memorial Coliseum).

• Encouraging your students and colleagues to engage in one of many book discussion opportunities of “Born A Crime” that will take place across campus in early fall.

• Facilitating a post-assembly discussion in your class or with others in your college or department; discussion guides focused on the assembly and Noah’s autobiography will be available later this summer.

Information on the opening assembly featuring Trevor Noah as well as other events related to UK’s commemoration of 70 years of integration can be found on the UK Office for Institutional Diversity’s webpage at www.uky.edu/diversity/70years.

Tickets are free for UK students and employees, and are required for entry. They will be available beginning next week.