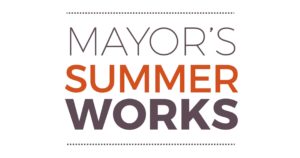 “SummerWorks is a critical step in building and supporting our pipeline of talented workers,” Mayor Fischer said. “The skills learned and relationships developed during a summer job carry over into the new school year and help set young people on a path to career success.”

GE Appliances SummerWorks student Zaina Katembo gained confidence in the business place during her experience and hopes to have a future with the global company.

“When I started work, I was very nervous,” said Katembo, 19, senior at Moore High School who moved to the U.S. from Tanzania in 2016, “but my co-workers and supervisors made me feel very welcomed and at home. I really appreciated this opportunity and would like to work for GE Appliances after I graduate.”

SummerWorks also expanded its partnership with the Academies of Louisville at JCPS, exceeding its goal of placing at least 200 Academies students in summer jobs that aligned with their career pathway.

During the celebration, the Mayor cited a newly released study, which was commissioned by KentuckianaWorks and conducted by the Kentucky Center for Statistics, that measured the long-term impact of SummerWorks on youth. The study found a variety of positive outcomes associated with SummerWorks, including higher graduation and employment rates.

“The data we’re seeing today reinforces our belief that a summer job experience can have a lasting positive impact on a young person’s life,” the Mayor said. “We must continue investing in SummerWorks in order to make sure all young people in our community, regardless of the barriers they may be facing, have a chance to benefit from this kind of experience.”

To read the full study conducted by Kentucky Center for Statistics, visit www.kentuckianaworks.org/news.

SummerWorks is funded through a mix of public funds and private donations (private employers pay the salaries of their own SummerWorks youth). Major donors include the JPMorgan Chase Foundation, the Paul Diaz Foundation, the James Graham Brown Foundation, David Jones Jr. and Mary Gwen Wheeler, Henry Heuser, Genentech, Christy Brown (through the University of Louisville’s Envirome Institute), and the Community Foundation of Louisville, among others.

SummerWorks, operated by KentuckianaWorks in partnership with YouthBuild Louisville, was founded by Mayor Fischer in 2011 with the goal of offering valuable summer job experiences to Louisville youth, especially those who are experiencing poverty or face other barriers that make it difficult to find a quality summer job.

To learn more about SummerWorks and how to get involved, either as a participant, employer, or supporter, visit www.summerworks.org.