In 2017, Jordan and Jessica Kite were on the hunt for their wedding venue when they found just the spot in downtown Versailles, an old church from the early 1900s. It needed extensive renovations, though, so they bought the building and gave it the name The Galerie Events. Theirs was the first wedding held at The Galerie, in October 2018.

A couple of months earlier, the Kites and friend Alex Riddle formed Kite Riddle Holdings in order to purchase all three buildings on Court Street from the Versailles United Methodist Church.

“We really wanted people to feel like they were coming back to a centralized old-time community,” Jessica Kite said, “where people know your name and care about you and your kids.”

Her husband added, “Versailles is in a perfect location, nestled in bourbon and horse country, and has some of the most community-minded people I have ever met, which makes this place so special.

Now a venue space, the main church building has about 6,500 s.f. for weddings, cocktail receptions, corporate functions and other events. There’s also an entire floor devoted to bride and groom suites, along with a balcony for a touch of an outdoor experience.

Taking care to preserve the historic character of each building during renovations, the owners of Kite Riddle Holdings have named the properties Steeplechase Centre. After crafting an entire venue space for the first building, they opened the second and third buildings to commercial tenants. All are local business owners.

“Nobody cares more than a local small-business owner,” Jordan said, “so that was naturally the type of person we gravitated towards to create this community.”

There’s Rolling Oven Taproom, featuring brick oven woodfired pizza and craft beers; the personal training company Fitness Plus; and family photographer Amanda Hacker Photography in the second building. The third building houses Spotz Gelato, a Kentucky Proud company that makes its own gelato and sorbet from local ingredients; Mrs. Rogers’ Popcorn & Sweet Shoppe, with gourmet white chocolate popcorn and all kinds of baked goods; wedding photographers Keith & Melissa Photography; the beauty boutique All That Is Lovely; and the offices of The Galerie.

And yes, there’s room for one more. Make that two or three, as Steeplechase Centre has another 2,000-s.f. tenant space available. “The goal was to create a cohesive group of tenants that worked in conjunction with one another,” Jordan said, “to create a destination for local customers as well as a day-trip for people from around Central Kentucky.”

Jordan Kite is a native Central Kentuckian. Following his second deployment with the U.S. Marine Corps, he used his GI Bill to become a software developer. Six years later he entered the field of commercial real estate development. He and Alex Riddle have known each other since the sixth grade.

Jessica and Jordan work at Kite Riddle Holdings and the Steeplechase Centre business full-time. “We both made the decision to leave our jobs in 2018 to make this investment,” Jordan said. “Alex supports the team as much as possible while juggling his job as an equine pharmaceutical sales rep, but we hope to have him join the team full-time soon.”

“The city and community organize regular downtown events, and the City of Versailles recently applied for and was granted an entertainment destination license, which supports local business and drives tourism,” Jordan said. “We’re all delighted to be a part of this community and the revitalization of downtown.”

The business owners are as emotionally invested as they are financially in the well-being of Woodford County and downtown Versailles. “It’s been a pure joy to be able to watch over the last year and see this corner of the world spring back to life,” Jessica said. “We’re in such an amazing location between Lexington, Louisville and Frankfort. Woodford County has endless possibilities.” 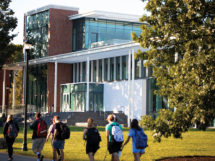 The Bottom Line: Beshear points to Bevin decisions he will reverse 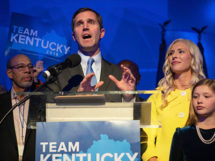