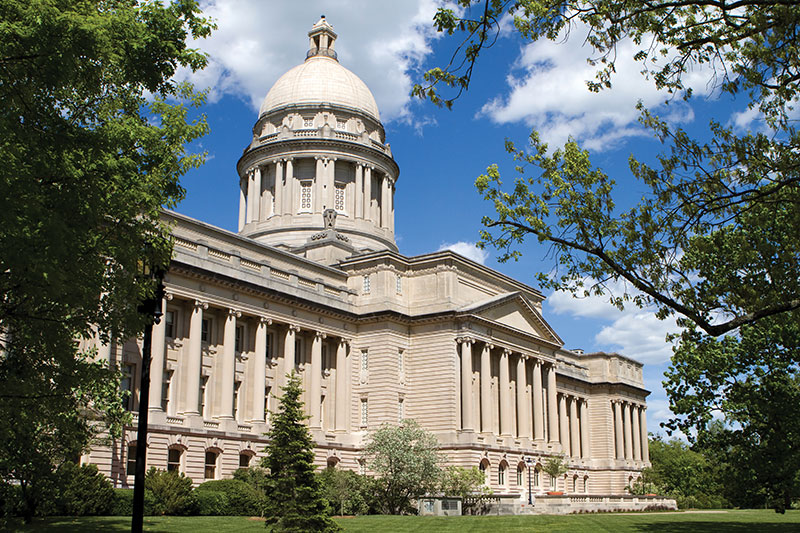 Doris Kearns Goodwin captured the unexpected alliances of Lincoln’s presidency in her masterpiece “Team of Rivals.” Borrowing a version of this phenomenon, the dynamics of 2020 in Frankfort might be called “team of equals.”

Still, new Governor Andy Beshear is adding allies who were once challengers, starting with long-time House member Rocky Adkins in the role of senior advisor. Adkins spent 14 years as House majority leader before the Republican takeover, then ran against Beshear in the 2019 Primary.

Adkins will lend considerable understanding of the legislative process and provide a valuable conduit to Rep. Derrick Graham and Rep. Joni Jenkins in their roles as Democratic leaders. Both have given input as part of the Administration’s transition team.

Former Lexington Mayor Jim Gray will head Transportation, a surprise move. Gray had been talked about for a governor’s race but chose the congressional Democratic primary against Amy McGrath. A strong background in building buildings with his family’s Gray Construction, he will now direct building roads.

Lt. Gov.-elect Jacqueline Coleman will become Secretary of Education and Workforce Development. It’s been a quarter century since a person in the second spot served in the cabinet. Coleman, an educator, becomes a more equal lieutenant governor.

In a second wave of executive announcements, more equals joined. Mary Noble served with distinction as a justice on the state Supreme Court, now taking the role of secretary of the Justice Cabinet, which includes prisons and State Police. Kerry Harvey, highly regarded as a former U.S. attorney, will head Public Protection, a diverse cabinet.

Holly McCoy-Johnson comes from a career in key public service posts to fill a top spot as finance secretary, the agency that controls and monitors myriad contracts for outside services.

Other recognized standouts are Larry Hayes for economic development and Eric Friedlander at the health cabinet, both in acting roles and both alumni of the Steve Beshear administration. Hayes has an exceptional track record in job creation. Friedlander is a health policy expert who rose to deputy secretary.

Guiding the House floor is Rep. Bam Carney, also an educator. In this role Carney covers the entire range of issues. Speaker Pro Tempore David Meade together with Whip Chad McCoy and Caucus Chair Suzanne Miles round out the GOP leadership. In a surprising move, the House has invited Governor-elect Beshear to their annual retreat – an expression of goodwill both ways.

Other scenarios for leaders in roles considered equal emerge.

Creating the state’s two-year spending plan is a tough task, and 2020 is a budget session. Beshear will present the Governor’s Budget January 21.

Then House Appropriations & Revenue chair, Steven Rudy, works over the document. Next comes the Senate where Christian McDaniel is chair. In many ways the arduous budget job never stops for these leaders.

School safety was a celebrated accomplishment in the 2019 session, but now comes the funding piece estimated to be over $300 million for the two years. Sen. Max Wise and Rep. Regina Huff will be front and center on this. The issue is a good example of the local impact spread across regions for what comes out of Frankfort.

Rep. Kim Moser chairs the Health and Welfare Committee, a forum for key issues, leading to hard work in the off-season known as the Interim Session. Public health transformation is a bill pre-filed by Chair Moser after much work from a coalition of stakeholders over the summer.

Always top of mind in the health category is Medicaid – a significant budget factor with billions to manage, the majority being federal funds. Leaders on this are Sen. Steve Meredith and Rep. Dan Elliott, chairs of Medicaid Oversight.

Rare cooperation on a proposed new gun law has originated in the Senate. Led by Paul Hornback (R) and Morgan McGarvey (D) they are joined by Julie Raque Adams. All three hold important leadership roles in the 38-member chamber. Called ERPO, or Extreme Risk Protection Order, similar laws in other states are being used as examples.

Northern Kentucky itself is a team of equals with a cadre of committee chairs.  In addition to McDaniel and Moser, Sen. John Schickel and Rep. Adam Koenig manage active, parallel Licensing & Occupations Committees.

Koenig is also a vocal proponent of sports betting, an issue Beshear has pushed as part of his revenue plan.

Pension looms large now and for years to come. Rep. James Tipton and Rep. Jerry Miller have led the charge from the GOP, Rep. Joe Graviss from the Democrats.

Of ever-increasing weight is the Road Fund, as infrastructure updates are badly needed around the state. Sen. Jimmy Higdon and Rep. Sal Santoro oversee numerous requests for transportation funding.

An election year on the horizon to boot, 2020 is one for the books. Never before has Kentucky faced the political conditions in which it currently finds itself. Perhaps an extraordinary era of equals will result in extraordinary outcomes.