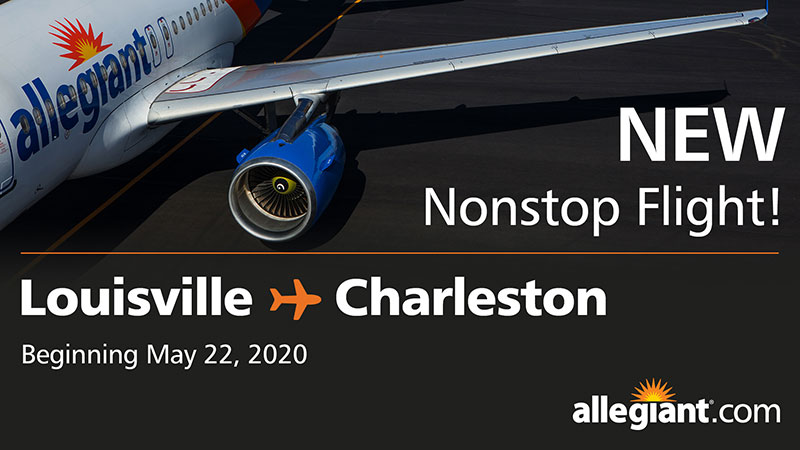 Nonstop flights to Charleston, S.C. will be offered twice weekly on Mondays and Fridays. The airline will operate the flight using an Airbus A319 with 156 seats.

“Announcing new, nonstop service to Charleston International Airport from Louisville is a great way for us to kick-off a new year,” said Dan Mann, executive director of the Louisville Regional Airport Authority. “Allegiant’s continued investment at SDF with their 11th destination being Charleston, speaks to the community’s strong desire for additional leisure travel options. We appreciate Allegiant’s confidence in our market and contribution to our continued passenger growth.”

Service to Charleston is also record setting. It marks the airport’s 33rd nonstop destination, the most nonstop flights for Louisville. It is also Allegiant’s 11th route from SDF, where the airline also provides service to Destin-Fort Walton Beach, Fort Lauderdale, Las Vegas, Myrtle Beach, New Orleans, Orlando-Sanford, Punta Gorda, Saint Petersburg-Clearwater, Sarasota and Savannah-Hilton Head. Tickets to Charleston, along with all of Allegiant’s routes, are now on sale at www.AllegiantAir.com.

“Thanks to a booming economy, a great convention scene and a thriving tourism industry, our city is attracting more than 16 million tourists a year, and news like this will help us build on that,” said Louisville Mayor Greg Fischer. “Direct flights like this help local businesses, make us more attractive for businesses looking to locate here and provide great new options for people wanting to travel to and from our city.”

In addition to a record number of nonstop destinations, this announcement follows a string of passenger milestones for Louisville Muhammad Ali International Airport. Since September 2018, the airport continues to build on its momentum with each month’s traffic serving as their highest yet. The airport anticipates that 2019 will break passenger traffic records, and growth is expected to continue into 2020.

Louisville Muhammad Ali International Airport is served by six airlines offering flights to more than 30 nonstop destinations including 19 of the region’s top 20 domestic markets. With just one stop, travelers from across the region can reach more than 460 destination sin the U.S. and worldwide.