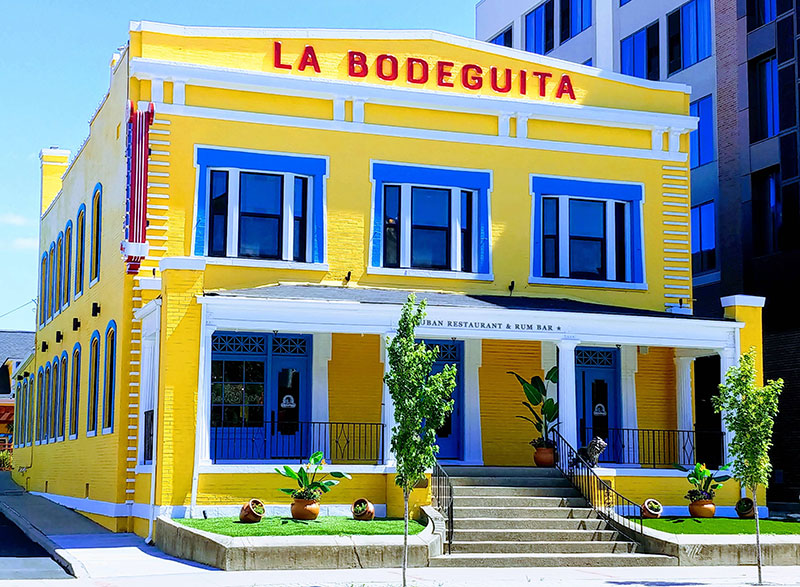 Cousins Fernando and Yani Martinez, who have made multiple Food Network appearances, are delivering their most personal and elaborate eatery yet − one that transports guests to 1950s Havana in all its vibrant glory.

“La Bodeguita de Mima is a passion project for us,” said chef Fernando Martinez. “The restaurant is named after my ‘Mima’, my mom. The food is very much a tribute to our family, from Mima’s Ropa Vieja (shredded and braised beef in a flavorful sauce of tomatoes, onions, peppers and spices), to our grandmother’s black beans, to my aunt’s flan.”

The spacious 6,200-s.f. building dates to 1911 and immediately reminded the Olé partners of a particular “paladar”, an authentic family-run restaurant in Cuba they had recently seen on a trip to Havana.

Olé commissioned Miami-based Cuban American artist, Karoll William, to fashion a unique interior experience. “I have had the pleasure of designing restaurants in places like South Beach and Las Vegas, but I believe La Bodeguita de Mima is the most beautiful of them all,” said William.

The restaurant is comprised of two floors and a large outdoor space geared toward live music and weekend salsa dancing, and of course mojitos — very fresh ones using a “guarapera,” or a sugar cane juicer.

A separate outdoor space has been built for a cigar lounge where cigar sommelier, Armando Rissotto, who previously ran Casa Del Habano in Havana, London, and Dubai, will curate custom selections.

La Bodeguita De Mima is one of two new eateries from the company in 2020. Señora Arepa, a fast-casual Venezuelan concept featuring the namesake arepa, a popular Latin American maize dish best described as a cross between a tortilla and a pancake, will open directly behind La Bodeguita Mima in late fall.