Adams said that working with a bipartisan group of county clerks and members of the State Board of Elections, as well as the Governor, he believes the system in place for the November general election is as safe as possible and will accommodate the higher voter turnout expected — and get us “closer to normal.”

“We are encouraging absentee balloting for those who need it,” he said. That would include any vote of an age or health condition, in contact with such a person, or deemed to be at risk. 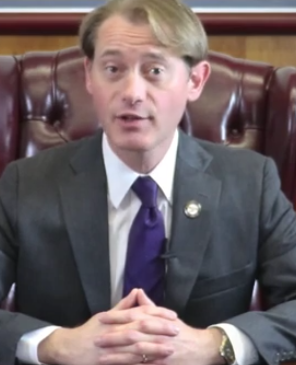 Absentee ballots can be requested at govoteky.com, where citizens can also register to vote, update voter information, apply for and track an absentee ballot and volunteer to be a poll worker.

Adams said that a 72 percent turnout is expected in November — about 2 1/2 times the primary turnout. If 75 percent vote absentee — that is a number the system isn’t designed for.

“As of yesterday, we’ve received 321,000 requests for absentee ballots,” he said. “That actually is about 80,000 ballot requests under where we were at this point in the primary, and this is for a general election with two-and-a-half times the turnout. Again, absentee balloting is a good thing, but we don’t want too much of a good thing, especially as we’ve proved that we can safely vote in-person.”

“To help ensure we don’t overload the circuits on Nov. 3, we’ll have early voting all day on weekdays and even a minimum of half-day Saturday hours for in-person voting starting Oct. 13,” he said.

On election day, there will more voting locations than there were in the primary.

Some counties have managed to reopen every single precinct, he said. On this, Adams lauded Jim Luersen in Campbell, Naomi Jones in Fulton, Charlotte Willis in Grayson, Duck Moore in Jackson, Carol Eaton in McLean, Krystal Chapman in Menifee, Leslie Cunningham in Todd, Tina Browning in Trimble, Heather Piercy in Wayne.

“This will not be possible everywhere,” he said, either because of insufficient poll workers or insufficient locations available that can allow for social distancing.

Adams said the poll worker volunteer portal at govoteky.com has produced 4,000+ volunteers of the 15,000 poll workers it takes to run an election day operation. He also cited the special promotion on beer cans and bottles to spread the word about the need for poll workers and that the Kentucky Bar Association will award CLE (continuing legal education) to attorneys who volunteer as poll workers and take the necessary training. 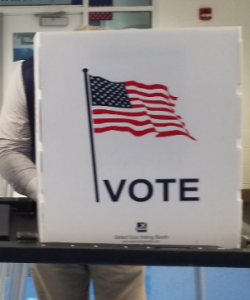 “All this is good news, but it brings us to the question of, what does all this cost, and how do we pay for it?” he said.

Here’s what he reported:

“First, following the primary we had about $2 million left in Help America Vote Act dollars earmarked for election equipment upgrades, and $2.5 million left in CARES Act funding which is much more flexible. So, and these are round numbers, $4.5 million.”

Here’s the budget, he said:

• $4 million for absentee ballot postage – some of this is for reimbursement to counties for mailing out ballots, and some of this is for the return postage paid by the State Board of Elections.
• $2.2 million for additional county staffing – our county clerks need manpower to facilitate absentee ballot processing.
• $2 million for election equipment – this can be paid out of earmarked HAVA funds, but must be matched in part by county governments. KACO has helpfully offered low-cost financing to assist with this. Upgrading equipment is a long-term investment with a big benefit: it transitions us away from old-style election machines to scanners processing paper ballots. Paper ballots mean we have a paper trail, which voters appreciate.
• $40,000 for a State Board of Elections call center, to take some pressure off our county clerks’ phone lines.
• $1 million for public service announcements – relatively speaking, this is a luxury, but just barely. The better we can inform voters about changes – about how to vote absentee without spoiling their ballots, about where to vote in person – the more successful election we’ll have.
• $500,000 for miscellaneous costs – one example here is we’ve bought 1.2 million ink pens for one-time voter use.

This accounts for $9.74 million and subtracting the $4.5 million carryover that leaves $5.24 million.

“That’s a bargain for a successful presidential election held during a pandemic,” Adams said.

Yum! Brands Appoints DICK’S Sporting Goods President Lauren Hobart to Board
We are excited to relaunch “Wear To Show You Care”