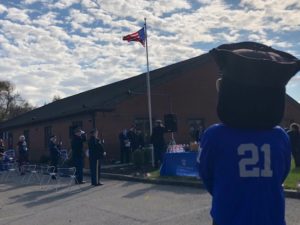 CRESTVIEW HILLS, Ky. — Thomas More University held an outdoor ceremony in observance of Veterans Day. The ceremony, which was outside of the Center for Adult and Professional Education (CAPE) this event included remarks from President Joseph L. Chillo, LP.D., Veteran and Thomas More alumnus Jesse Neack ’20, and Veteran and Thomas More faculty Jack Rudnick, Jr., Ed.D., and was emceed by Veteran and Vice President for Enrollment Management Chris Powers, Ph.D.

The Thomas More Marching Saints kicked off the ceremony with their rendition of the national anthem while the Green Township Veterans of Foreign Wars Post 10380 presented the colors. Chillo gave initial remarks, welcoming guests, and reflecting on the meaning of the day. The ceremony also included an unveiling of a new flagpole established at the CAPE Building, which was donated by Home Depot of Crescent Springs, Ky., and an announcement was made regarding the student winners of a new essay contest themed “Respect a Veteran” that encouraged Thomas More students to demonstrate gratitude for those who have served.

“Today, I am thankful that we are given the opportunity to congregate, safely, as a Thomas More community in gratitude for those who have sacrificed so much for our country,” said Chillo. “We serve 45 student veterans or dependents of veterans at the University, and they deserve recognition not only today, on Veterans Day, but every day for the personal sacrifices that they have made. To all those who have served our country, and to the veterans, fallen and living, in our Thomas More family – thank you for your service.”

Thomas More alumnus and Veteran Jesse Neack ‘20 served eight years in the U.S. Army, which comprised of five years Active Duty with duty stations of Fort Richardson, Alaska, and Fort Campbell, Ky. He was deployed to Iraq in 2003 with the initial invasion force and was injured in combat on June 3, 2003, when he fell 45 feet from a Blackhawk helicopter on a mission.

“Today we should be thankful for those who have raised their right hands and swore to defend the Constitution of the United States against all enemies, foreign and domestic,” Neack said. “…Whenever you see that wonderful symbol of our country flapping in the breeze, just remember the wind is not creating that breeze, that breeze is made up of the last breaths of the men and women who died defending the liberties it represents. The red represents the bloodshed defending it, the white represents the purity and goodness of the ideals this nation was built upon, and the blue is because God loves the Infantry.”

After he separated from service, Neack used his GI Bill benefits to gain a bachelor’s degree in accounting from Northern Kentucky University. In 2018, he decided to further his education and pursued a Master of Business Administration at Thomas More. He graduated in August of this year. He is currently the business manager for The Heart and Vascular Institute at St. Elizabeth Healthcare. He has been married to his wife, Melissa, for 13 years and they have two amazing little boys, August and Atticus. In his free time, he does what he can in the veteran community to help his brothers and sisters who have not adjusted as well as he has to live after service.

Professor and Veteran Jack Rudnick, Jr., Ed.D., joined the Thomas More faculty in 2002 to fulfill a lifelong dream of teaching. He is drawn to the mission of Catholic organizations resulting from service as a health care administrator in multiple Catholic healthcare systems in Cincinnati, Youngstown, Boston, and Memphis. He claims that Thomas More felt like a natural fit at the time he was searching.

“I am the proud son of Army Private First Class, John Rudnick, Sr., and my grandfather Army Purple Heart medal recipient Corporal Frederick Hailer — both deployed to overseas theatres from my hometown of Boston in 1939 and El Paso Texas in 1916 respectively,” Rudnick began. “My mother, Theresa, who is 92 has recounted stories over the years of nightly blackouts in their east coast home near the Atlantic Ocean on many nights during World War II for fear that German planes might bomb them as targets.”

He claimed that stories such as this from his mother along with World War II memorabilia he found in his childhood home basement established the foundation for his decision to join the Navy Medical Service Corps in 1975, in which he served more than five years. It was during these years that he met a Navy nurse, Kathy, who is now his wife.

“Most of my military service was in domestic healthcare facilities stateside—but I appreciate our freedom and do not take it for granted,” he added.

Rudnick also announced the student winners of the essay contest conducted on campus. Among double-digit entrants, student Charles Dreyer, a graduate student, was the first-place recipient, receiving a $100 gift card. Second place, receiving $50 gift cards, was a tie between sophomore Alyssa Servin and sophomore Whitney Brown. The third-place winners, also in a tie, were first-year Katelyn Weldon and senior Samantha Potter, who both received $25 gift cards.

Thomas More offers scholarships to veterans seeking admission to the University. For more information, contact the Admissions Office at calling 859.344.3332 or sending an email [email protected].