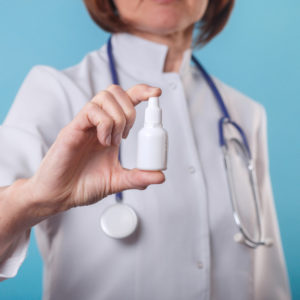 LOUISVILLE, Ky. – The University of Louisville has received funding from the U.S. Department of Defense (DoD) to develop a nasal spray to prevent serious viral respiratory infections such as COVID-19 using Q-Griffithsin, a drug compound developed and co-owned by UofL.

The one-year project, funded through an $8.5 million agreement from the DoD, includes developing the spray, testing the formulation in lab studies, and conducting a Phase I clinical trial. The researchers expect the spray to be used to protect frontline health care workers, military personnel living in close quarters, and other essential workers, as well as vulnerable people for whom a vaccine might not be fully protective.

Kenneth E. Palmer, Ph.D., director of the UofL Center for Predictive Medicine for Biodefense and Emerging Infectious Diseases and the Helmsley Charitable Trust Endowed Chair in Plant-based Pharmaceutical Research at UofL, is leading the project, known as PREVENT-CoV.

Q-Griffithsin (Q-GRFT), an analog of the biologic griffithsin, discovered at the Center for Cancer Research, NCI and co-owned by UofL, the University of Pittsburgh and the National Cancer Institute, is a potent anti-viral protein that acts against multiple coronaviruses, including MERS, SARS-CoV, and SARS-CoV-2, as well as pandemic threat viruses such as Nipah virus. An application using Q-GRFT to prevent HIV infection already is in Phase I clinical trial.

With positive results, the researchers would seek U.S. Food and Drug Administration (FDA) Emergency Use Authorization (EUA) for the deployment of the formulation, a step that the researchers anticipate could happen as soon as the end of 2021.